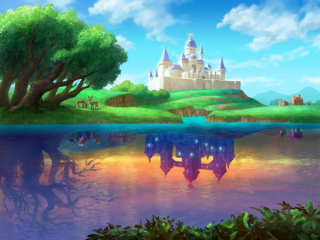 Nintendo has been pretty tight-lipped about the storyline for its upcoming video game "Legend of Zelda: A Link Between Worlds."

But at its Oct. 11 panel at New York Comic Con 2013, Nintendo developer Eiji Aonuma debuted a new trailer and revealed more about the game's hero, its new villain, and a mind-bending twist on the game's titular character: Princess Zelda herself.

Aonuma revealed that the "merge" ability, shown in previous trailers to let protagonist Link become a two-dimensional painting on a wall, has another function as well. In his painting form, Link will be able to slip through the cracks that connect Hyrule, the fantasy kingdom in which most "Legend of Zelda" games are set, and a mirror kingdom called Lorule.

Lorule is similar to the "Dark World" featured in the game's prequel "A Link to the Past," but Aonuma said that this parallel kingdom is "a different different world."

"[Zelda and Hilda] are both princesses, they're both thinking about their kingdoms, but they each have different desires and different motives, and how those interact and perhaps conflict is how the [game's] story develops," Aonuma said, speaking through a translator.

The trailer also shows the narrative context for Link's "merge" ability by showing a new villain turning Princess Zelda into a painting which he then steals.

The villain looks something like a cross between Ganon, the main antagonist of nearly every "Legend of Zelda" game, and Ghirahim, the secondary villain of the 2011 game "Legend of Zelda: Skyward Sword."

The panel also featured some live gameplay that showed Link using the "merge" abilities in more ways than had been revealed in the demo: Link was seen "merging" with a wall to get behind three-dimensional objects on the wall such as a mounted bust or a ladder, and then popping back into the three-dimensional world to knock the object free.

Unlike earlier "Legend of Zelda" games where players collect new items over the course of the game, in "A Link Between Worlds" most items will be available for purchase or rental right at the start of the game, meaning that players will be able to access nearly all parts of the map right from the start.

During the panel's question and answer section, one fan asked if Nintendo planned to do anything new with the 2001 popular game "Legend of Zelda: Majora's Mask."

"If you play 'A Link Between Worlds' you may get an answer," Aonuma replied, prompting gasps and applause from the jam-packed audience.

"The Legend of Zelda: A Link Between Worlds" will be out for Nintendo's handheld consoles 3DS and 2DS on Nov. 22.