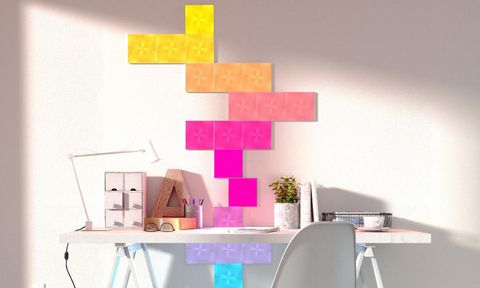 The Nanoleaf Canvas isn't your everyday smart light; it's a display. Like a large poster or painting, it will turn heads. Your guests will want to know what it is, and they may be shocked to find out how much it costs.

These LED panels can be interlinked in a variety of ways and can display more than 16 million colors. What's more, they're both touch- and sound-sensitive, creating a dazzling light show on your wall. At $249, this product is no bargain. But if you've got the cash for a luxury purchase, splurge away.

Here's how it works: The Nanoleaf Canvas Smarter Kit (get it?) includes nine panels, a power supply, nine linkers and 28 adhesive strips. You attach the panels to each other using the linkers (much easier than it sounds) and use the adhesive strips to stick the panels to the wall. You can arrange them in whatever design you'd like, and the Nanoleaf app can help you out.

Each Canvas panel is a 5.9 x 5.9-inch square. A short ridge divides them into four sections, giving the appearance of a flattened gem. Unlike the older, triangular Nanoleaf Aurora, the Canvas has a built-in audio sensor (to sync your lights to music and games); this was a separate accessory with the Aurora.

One complaint: The adhesive strips that come with the Canvas are very strong, maybe too strong; they'll keep the panels securely on your wall, but it's unlikely you'll be able to remove them without damaging the paint. This means you'll have a hard time moving these panels around or changing the design. So for most folks who rent their homes (like me), the Canvas is a no-go.

There's no other word for it: The Nanoleaf Canvas is stunning.

The coolest feature by far is Rhythm Mode, wherein the panels respond in colors and effects to your music (or any other ambient noise they hear). I played all sorts of music in front of the Canvas, from classical to hard rock, and it pulsed and rippled along to match without missing a note. A clap creates a brief explosion of red, while a laugh or shout sets off waves of yellow and green.

But the Canvas can also cycle through Scenes, which are preset medleys of colors and effects available in the Nanoleaf app for Android and iOS. I tried dozens, and there wasn't one I didn't like. Try Vibrant Sunrise as you wake up in the morning, Shooting Stars for a romantic night in, Disco Color for a wild party or Christmas Lights during the holidays. My personal favorite is Netflix and Chill, a soothing and oddly sensual rotation of reds, maroons and blacks. If none of the presets suit you, you can create your own.

The Canvas also comes with a few cute games, including variants of Pac-Man and Whac-A-Mole. I'm not convinced anyone actually wants to play games on their wall, but if you do, this is the perfect device for you.

The Canvas has another excellent upgrade from the Aurora: touch sensitivity. Long-pressing any panel sends a ripple across the entire display, while a tap turns the panels on and off. You can map additional functionality to touch gestures (for example, swiping to change scenes or tapping to adjust brightness) in the Nanoleaf app. This was fun to play around with, though I sometimes had to repeat gestures multiple times before the tiles responded.

If gestures aren't your speed, you can press buttons on the control square to power the device on and off, adjust brightness, or switch between color shemes. You can also select and schedule scenes, and create your own, in the Nanoleaf app.

Finally, Nanoleaf makes a very cool remote (the Nanoleaf Remote) that you can use to control the Canvas, as well as any other HomeKit-enabled devices. On this dodecahedron, rotating each side up enables a different scene. You don't need this remote by any means, but if you have $49 to spare, it makes for a nifty addition.

While touch controls are cool, meandering over to the wall to turn the Canvas on and off may come to feel like a chore. As one of the best Alexa compatible devices, best Google Home compatible devices and best Homekit products, you can use Alexa, Google Assistant or Siri to control Nanoleaf Canvas with your voice. That makes the Canvas a more versatile fixture than many of the best smart lights.

You don't need the Nanoleaf Canvas. It's a fun decoration, and a pricey one at that.

But if you want the Nanoleaf Canvas, and can afford it, you should buy it. The wall panels are gorgeous, functional and fun, and they can probably integrate with whatever smart-home system you have. They're certain to transform your home, and while they're a big purchase, they're a purchase you won't regret.