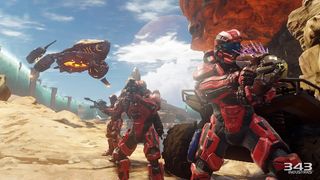 LOS ANGELES -- Not content to relegate Halo 5's large-scale battles to its campaign, developer 343 Industries has unleashed a brand-new multiplayer mode for the upcoming shooter: Warzone. This fresh take on Halo multiplayer pits two teams of 12 Spartans against one another across massive battlefields, but also mixes in computer-controlled opponents and unlockable weapons so that there's always something fun to do. We sent two of our sharpest shooters to battle in this new mode at E3 2015 -- here's what they have to say.

Simply put, Warzone is the type of competitive mode I always wished Halo had. The series has long offered huge maps to do battle in (what Halo fan doesn't love Blood Gulch?), but the way Warzone drops AI enemies into the player vs. player action creates an experience unlike anything offered in previous Halo games.

The Warzone map I played on was positively sprawling, with plenty of open spaces for long-range firefights as well as tight corridors that promoted close-quarters combat. While rushing towards the enemy base, the game's announcer would occasionally provide a heads-up that either Covenant or Promethean forces -- Halo's two main enemy types -- were on the way. From there, I joyously juggled taking out alien foes while also putting down a real-life adversary or two.

I genuinely felt like I was playing a hybrid of Halo's story and multiplayer modes during my Warzone session. There were certain times when I barely saw a member of the opposite team, but instead explored around and leisurely took down a few angry aliens with my trusty battle rifle.

Defeating non-player characters contributes to your team's score just like killing your fellow Spartans does, and you can rack up even more points by taking out the powerful AI captains that occasionally permeate the battlefield.

That's what makes Warzone such a special part of the Halo 5 package; even if you stink at the game, you can add to your team's score by popping a few Covenant soldiers. This concept isn't a brand-new one -- last year's Titanfall offered a small sprinkling of AI opponents in competitive matches, but Halo 5's non-player characters are a far more integral part of the experience.

Killing enemies of any type lets you level up your character mid-fight, with more and deadlier weapons and vehicles available the higher you go. Sprinkled throughout the map are requisition terminals that let you swap out your gear, with an arsenal that includes basics like the assault rifle and pistol to start, and deadly power weapons such as the Energy Sword or Spartan Laser later on. I was overjoyed when I finally unlocked my trusty rocket launcher, which I used to blow up an enemy Ghost vehicle just as it was trying to ambush me at the terminal.

Fortunately, battling in Warzone mode feels just as great as it does in the rest of Halo 5, as I was able to utilize the same acrobatic Spartan abilities that I loved in last year's multiplayer beta. After 25 or so minutes of shooting Spartans, aliens and helpless marines, our team reigned victorious. It wasn't even close.

Just call me the shotgun surgeon. Although Warzone starts you off with an assault rifle and a magnum, I do my best work up close and personal. After Mike and I helped our red-suited team secure our base, I split from the group to see what kind of trouble I could get into.

It didn't take long for me to run into a small squadron Covenant soldiers. I boldly ran up to the first hostile, taking it down with two well-placed shots to the body. Although I significantly damaged the shields of the enemy next to my recently-departed foe, it wasn't enough to put him down for good.

I made a hasty retreat to cover to let my shield regenerate, but not before leaving the remaining members of the squad a grenade for all their trouble. Posted up in a corner as my health rejuvenated, I relished the carnage I left in my wake. That is until, some jerk from the other team sniped me and left me in a crumpled heap.

When I respawned back at the base, I had a thirst for vengeance that had to be quenched. I joined my teammates as we they were engaging the blue team for control of several vehicles. Together, we managed to decimate most of the hostile unit, racking up several hundred points on the board, creating a sizable lead.

From there, my team moved on to hunting down a Promethean Knight. We worked on whittling the enemy's health down, but were too distracted to notice the blue team had gotten their hands on a tank, blowing several of us (me included) to smithereens.

The frantic back and forth between the faction continued until someone on the red squad performed the kill shot on the opposing team. That masterful kill gave us the 1,000 points needed to win the match, giving me the warm, fuzzy feeling of victory. However, I was disappointed that the demo ended before I could check out my kill/death ratio.

Although I'm not sure about how the single-player campaign will pan out in Halo 5, I'm definitely excited for the multiplayer. 343 Industries has given fans of the series exactly what they want -- expansive maps and tight, addictive gameplay.