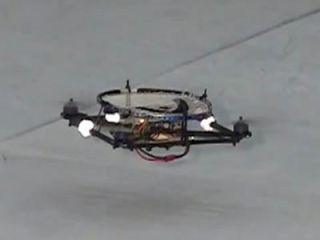 Remember the arcade game Arkanoid? It was supposed to be a one-player version of videogame great-granddaddy Pong. Essentially, the game involved moving your paddle about while trying to keep a bouncing ball in play. You moved to the next level when the ball destroyed all the bricks in play.

At Zurich's Institute for Dynamic Systems and Control, they're demonstrating the agility of their quadrocopters by having one of them juggle a lone tennis ball. It's Arkanoid at its most basic. Let's hope this little proof of concept leads to a full-blown live action version, complete with floating bricks and powerups.