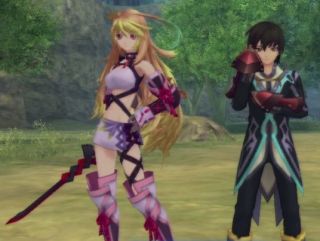 Welcome to the first installment of "Easter Eggs," a series where video game reviewers exhibit supplementary material that didn't quite make it into the original story. This article is a companion piece to our "Tales of Xillia" review.

Well, for one thing, you can check out “Tales of Xillia.” At this point, approximately five of you are nodding your heads in solidarity, but the rest of you are probably doing your damnedest to pronounce the last word in the title. Sit back, boys and girls, because you’re about to learn a thing or two about one of the most underrated JRPG franchises this side of the Pacific.

"Final Fantasy VII" had whetted a North American appetite for JRPGs, and a number of smaller companies, including "Tales" developer Namco, were glad to oblige.The "Tales" series hit Western shores in 1998 with "Tales of Destiny" on the PlayStation to very little fanfare. The game came more or less out of nowhere. Unlike the fully 3D, narrative heavyweight "Final Fantasy VII," "Tales of Destiny" looked like a Super Nintendo title and had a story almost guaranteed to put fans to sleep.

Still, there was something undeniably charming about the quirky little RPG. Rather than the staid, turn-based battles of the "Final Fantasy" series, "Tales of Destiny" embraced something that looked like a side-scrolling action game and played like a fighting game.

Like in "Final Fantasy VII," you could still assemble a party, explore a huge world with plenty of secrets to discover, and expose one villainous plot after another until confronting a suitably epic final boss. The whole experience had less gravitas, but also more humor and a little more unpredictability. Party members came and went, and you could even choose which ones to keep and which to eschew. "Tales of Destiny" was not the most memorable game on the PlayStation, but it showed a burgeoning generation of JRPG fans that not all games were like "Final Fantasy," either in scope or, disappointingly, in quality.

"Tales of Destiny" was actually the second game in the series, even though it was the first one to make its way stateside. "Tales of Phantasia" on the Super Famicon (the Japanese equivalent of the Super Nintendo) preceded it in 1995, and made a splash in its native Japan.

Although "Tales of Phantasia" had a propensity for repetitive grinding (fighting the same enemies over and over to gain experience) and a punishing enemy encounter rate (two things that the series, even today, has never really gotten over), fans loved the fast-paced, real-time battle system, the humorous, offbeat party members, and the villain who evoked genuine pathos. These features would go on to become "Tales" hallmarks.

Current page: How the "Tales" Series Found a Western Audience

Next Page An evolving franchise