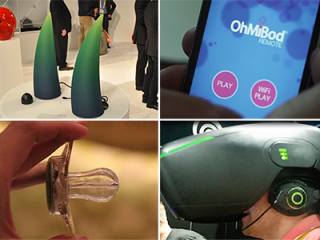 The annual International Consumer Electronics Show  is a great place to check out the best technology that’s  coming soon, but some products stretch the definition of creativity and can only be described as just plain weird. From a giant iPod and a massive VR headset to a lighter that helps you quit smoking, the Tom's Guide team saw devices that just boggled the mind. Here's the wildest tech out of Las Vegas this year.

There were tons of virtual-reality  headsets on display at CES 2015, but none could match the 3DHead in terms of sheer terror. This gargantuan headset morphs you into a sci-fi villain once you put it on, engulfing your head in a pitch-black dome with a tablet-sized screen inside. It’s ditching true immersion in favor of confusion and lots of neck strain. 3DHead is being billed as the "Oculus killer," and if you were to drop one on an Oculus Rift, it quite literally could be.

Never forget which corner you put baby in with the Pacifi Smart Pacifier. This Bluetooth pacifier comes with GPS so you can look for your runaway toddler. It also tracks your child's temperature and lets you monitor him or her via a companion app for iOS and Android.

You know that feeling when you're walking down the street in your sneakers, and have a sudden intense need to play a game of Simon? Skechers is solving that problem for you with its Game Kicks sneakers. Made for kids, the sneakers come in white or black variations for $65 a pair. You'll also get four color buttons, a reset key and a sound toggle. Now if only they made adult sizes…

Walking is so overrated. The Rollkers let you move your feet as if you were going for a stroll, but will whisk you along at up to seven miles per hour. The prototype only lasts about an hour on a charge; after that you’ll be stuck with an extremely heavy pair of non-rolling rollerskates.

Take your mind off your stresses and woes with the Melo Mind headset. This futuristic headband contains EEG sensors to read your brainwaves, then sends those to an app, which reads the patterns and plays music to calm you.

Imagine having your very own paparazzo dedicated to taking pictures of you whenever you want. Now imagine he’s a drone attached to your wrist that flies  up with a flick of your hand and snaps your portrait. The Nixie  carries a swiveling 1080p camera attached to a flexible wristband. When activated, it will fly up to a high angle, take your picture, then boomerang back to your wrist. You'll never miss a selfie moment again.

What better than a lighter to help you finally quit smoking? Quitbit is a Bluetooth-connected lighter that tracks how many times you've lit up per day and limits your smoking frequency. The companion app for iOS and Android tells you how many years of your life and how much money you've saved by restricting your cigarette intake, and an in-app community portal offers support while you quit.

This iPad Air-sized tablet is more like a giant iPod. You can load your own music, or use streaming apps to play your tunes to a connected speaker. Packing playback controls on both its front and back, the BeoSound Moment learns your music-listening behavior to figure out what to play at different times of day. The biggest thing about this giant iPod, though, is its $2,800 price tag.