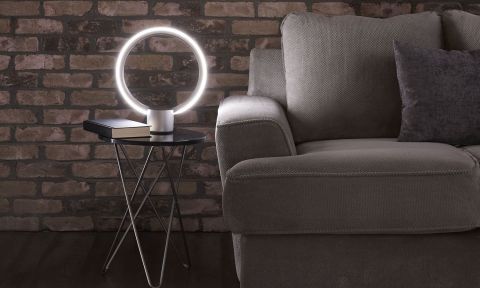 This smart light has Alexa built in, but you have to really like its circular design to pay this much.

If you were to ask someone from the '80s what a futuristic light would look like, he or she would probably come up with something like the Sol. This circular lamp has a ring of LEDS that not only brighten your room, but light up to tell the time, too. And the Sol also has Alexa, Amazon's voice assistant, letting you interact with it as you would an Echo or Echo Dot. It's an interesting concept, but this $114 light isn't for everyone.

Is that a Dyson? That was the question I was most often asked when friends first saw the Sol light, and it's hard to blame them. Comprised of a large silver plastic ring mounted to a silver cylindrical base, GE's novel smart light looks a lot like Dyson's new-agey fan.

Regarding design, it's a real departure from any other smart light, and while I'll give credit to GE for trying something different, it doesn't exactly align with my tastes for home decor. With a diameter of 13 inches, you'd have to really like having a large, glowing ring taking up a lot of space on your dresser. It's nice, but not nice enough to want as a decoration. My wife wasn't too crazy about its design, either. "It just looks like a big plastic circle," she said.

Using the C by GE app, you can also control the brightness and color temperature of the Sol's lights, and set timers for when it should turn on or off.

The outer part of the ring is made of white LEDs, which can be color-tuned to emit a warmer or cooler hue; the former is good for the evening, while the latter is better in the morning. They can get pretty bright; At max brightness, the 60-watt equivalent Sol was more than able to flood my bedroom with light.

The inside part of the ring is also lined with LEDs, but these are red and blue. Their most practical application is a clock; a red LED indicates the minute, while a blue LED notes the hour. The lights are diffuse enough so that you can't tell the exact minute, but it gives you a general sense of the time to within 5 minutes. Also, when you set a timer using Alexa, the lights will turn off one by one as the timer runs out.

Both the outer and inner lights can be controlled using touch buttons on the Sol's base. Here, you'll also find volume controls for its speaker, as well as a microphone mute button.

Using the C by GE app, you can also control the brightness and color temperature of the Sol's lights, and set timers for when it should turn on or off. You can also use the app to create scenes (such as Bedtime), which will automatically turn the lights to a specific brightness and temperature. You then have to create an Automation to activate that scene at a specific time. It's a slightly more cumbersome process than on the Philips Hue app.

As with most third-party devices that have Alexa built in, you can do almost everything you can with an Amazon Echo smart speaker, such as asking for the weather, news, playing trivia, reading recipes and more. When Alexa recognizes your voice, the inner ring of the Sol lights up in blue. It's a neat effect.

The Sol sounds better than the Echo Dot, but not by much.

For the most part, the two speakers in the Sol heard my voice clearly. However, there are a few things that Amazon doesn't enable on third-party Alexa speakers, such as the Sol. For example, you can't make phone calls using the Sol.

Another feature  the Sol doesn't support is whole-home audio, but after listening to a few tunes on the Sol, it's doubtful you'd want to use it for that function. The Sol sounds better than the Echo Dot, but not by much. Music is tinny, with little bass, and higher tones are harsh. It will suit for reading the news and weather, but anything more and you should get a real speaker.

The Sol light from GE should be considered more of a proof of concept than anything else. In that regard, it has some useful features, such as lights that change when you've got an Alexa timer running. It's design isn't for everyone, though, and its speaker is pretty weak if you're looking for something to play music. Kudos to GE for trying something different, but it needs better audio and more Alexa-centric applications for its lights, to be truly useful.