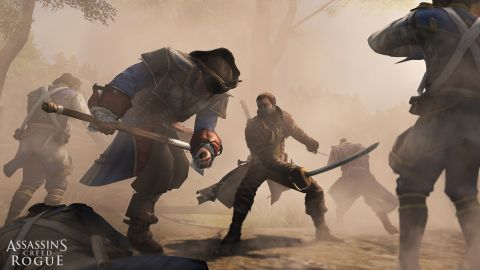 Assassin's Creed Rogue can be just as enthralling as its predecessors, but it sometimes feels dated and inconsequential.

Like the French and Indian War that inspired it, Assassin's Creed Rogue ($60; Xbox 360 and PS3; Xbox 360 version reviewed) has the misfortune of being sandwiched between more noteworthy events. For those who played any of the previous Assassin's Creed games that take place in the Americas, it treads familiar ground. For those who have already played Assassin's Creed Unity, it doesn't measure up from a technical perspective. But taken on its own merits, Rogue is well worth a look, especially from longtime series fans.

Assassin's Creed Rogue follows the exploits of Shay Patrick Cormac, an 18th-century Assassin who switches sides to champion the Templar cause. Like Assassin's Creed IV: Black Flag, the game is divided more or less evenly between stealth and combat on the ground on one hand, and naval exploration and warfare on the other.

"Familiar" is probably the best way to describe how Rogue feels. Even as a Templar, Shay pulls all the standard Assassin tricks. Staying out of sight lets you take down foes quickly and quietly, while open combat is chaotic and largely dependent on counterattacks. Shay gets a whole toy box of weapons, including an air rifle and a primitive grenade launcher, but the sword combat still takes center stage, and it's still OK — fun when it works, but easy to exploit, for both Shay and his AI opponents.

Naval combat deserves a bigger nod, as it's easily the more refined system of the two battle systems. Shay explores the Hudson Valley and the North Atlantic, from Halifax, Nova Scotia, up to Havre-Saint-Pierre, Quebec, and beyond, aboard his trusty ship, the Morrigan. (New York City is a third explorable area, since it just wouldn't be Assassin's Creed without at least one big city.)

The tactics and weapons you have available to you during naval combat are impressive. You can approach a ship head-on to ravage its sails or ram it, get up close and personal with destructive round shot, use puckle guns to sink smaller vessels or just go for good, old-fashioned broadsides. You can sink ships, board them or even recruit them into your own armada for the Naval Fleet mini game. This is mostly repeat content from Black Flag, but it holds up well.

Fun gameplay aside, the fact that Shay is a Templar is woefully underused. Stealth and assassination are still your primary objectives, and the side missions, which range from liberating forts to defending vulnerable targets, are all old hat. The naval exploration doesn't make much sense, considering that by 1754, piracy on the high seas was well and truly in decline. Shay would have been more likely to receive support from the military than collect resources at dozens of small ports.

Shay Patrick Cormac, a clever and compassionate Irishman, has trained his whole life as a loyal member of the Assassin Brotherhood. That all changes when he undertakes a dangerous mission that makes him realize how many civilians the Assassins have put in jeopardy and killed in pursuit of their goals. Now, as a member of the domineering Templar Order, Shay must hunt down his former brothers and sisters while paving the way for British dominance in the American colonies.

The story in Assassin's Creed Rogue takes place during the French and Indian War, the American theater of the Seven Years' War. Like the war itself, the plot seems to be there mostly to connect other events. The Seven Years' War is actually a rather fascinating topic, as it was possibly the first true "world war," taking place across four continents with almost every major European power involved. However, most Americans know it only as the conflict that spearheaded George Washington's military career and indirectly led to the American War of Independence.

Rogue seems keenly aware of this, as George Washington and Benjamin Franklin play key roles in the story, while the actual meat and potatoes of the war take a backseat. While it's interesting to see the game tie together the stories of Assassin's Creed III, Liberation, Black Flag and Freedom Cry, it can feel like a lot of tough connective tissue with very little succulent meat.

Assassin's Creed Rogue may be competent overall, but it falls down when it comes to visuals. While the art style goes for photorealism, as do the other games in the series, Rogue doesn't quite get there, especially when it comes to the environments. The game doesn't look as good as Black Flag, and has an abundance of jagged shadows and bleak locations. Even the character designs are a bit bland; you'll be hard-pressed to remember most of them a few months from now.

While this is arguably more of a gameplay criticism, the rocky, verdant landscapes of upstate New York and Canada feel at odds with the urban parkour Assassin's Creed gameplay (as we learned in the problematic Assassin's Creed III). Getting around is often difficult, and when you do, there's not much to see.

Like the visuals, the sound design in Rogue feels like a step backward from Black Flag. The original music serves its purpose well enough, but a lot of the shanties your crew sings as you prowl the northern seas are recycled. The handful of new ones aren't bad, but they're not terribly memorable, either. The tavern songs, which could have filled a folk album last time around, are now mostly just low-key instrumentals.

At least the voice acting is up to the franchise's usual high standards. Steven Piovesan as Shay sounds both thoughtful and conflicted. Roger Aaron Brown, reprising his role as Assassin mentor Achilles Davenport, plays a much younger, bitterer version of the character who has to grapple with both loss and insubordination.

What's good in Rogue was almost as good (and, in some cases, better) in previous games. The story patches holes in the mythos that didn't really need patching, and explores an era that didn't really need exploring in largely superficial ways. And yet, when you're cruising past Albany with a full crew, a shiny officer's sword and a new set of broadside cannons, it's easy to put those qualms aside.

At its best, Assassin's Creed Rogue is just as enthralling as its predecessors. At its worst, it serves as a reminder that the previous console generation, like the French and British squabbling over colonies in the New World, will soon come to an end.