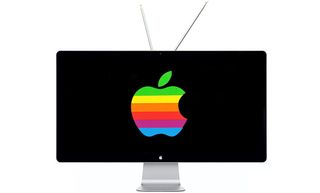 If The Wall Street Journal is right, Apple was developing a full television set —  an iTV, if you will — but the company gave up about a year ago. That's not shocking, since Apple couldn't bring much to the process of building a screen, but the company can still affect what appears on that screen.

Citing "people familiar with the matter," The Wall Street Journal reported last night (May 18), that after nearly a decade of development, Apple decided to abandon plans to build its own televisions. Apple tried to find killer features that would make its sets special, but its ideas didn't stand out, the article stated. "Ultimately, though, Apple executives didn't consider any of those features compelling enough to enter the highly competitive television market," read the article.

The good news for people who longed for Apple to "reinvent" television is that the company still can. And it can do so by making a better version of its Apple TV set-top box and by providing a better online TV service for cord cutters. Another bright spot: The fact that Apple couldn't find a way to make a better TV is a sign that TVs are getting better and easier to use, even without Apple's help.

MORE: The Best TVs for Any Budget

"What's the difference between making Apple TV versus 'Apple Television?'" wrote Jeremy Toeman in an email to me last night. Toeman's been in the TV and online TV business for over a decade, working for or with companies including Sling Media (makers of the Slingbox), Boxee, Vudu Dropcam and Sonos. "Truly, how would/could an Apple Television be a fundamentally better product than an Apple TV hooked up to *any* other screen? I'd argue it wouldn't," Toeman added.

Today's screens also offer some pretty great features. There may not be much 4K content yet, but even with HD video, the higher-res screens allow people to sit twice as close before seeing the distracting grid of pixels. Think of 4K/ultra HD as the Retina Displays of the TV world. The latest advances, such as wide color-gamut and high-dynamic-range TVs will produce images not just as good as but better than you can get in a state-of-the-art movie theater (primarily due to the deeper black and shadows they can render). For the first time ever, viewers can see a movie exactly as it looked to people who were on set, even based on scans of vintage film stock, an executive of Dolby told me recently.

One of the proposed Apple innovations the journal article cited was, "sensor-equipped cameras so viewers could make video calls through the set." Camera-equipped TVs with Skype integration were introduced years ago, and recognition of hand gestures and even people's faces has also been implemented. Perhaps Apple could have added some value by integrating FaceTime or Siri into a TV, but the company clearly decided that these features wouldn't be enough to justify a whole product.

"The efficacy of an Apple-branded TV has always been in question," said Steve Koenig, senior director of market research at the Consumer Electronics Association, in an email. "Apple's looking in the right direction with their alleged plans to roll out a larger range of services (e.g., content and media bundles) with the new Apple TV box. "

Could TVs Be Smarter?

While it was long a misnomer, the term "smart TV" is starting to be a valid descriptor for the latest TVs. Roku, which makes the second-most-popular set-top box (after Apple TV), is now putting its software on budget-priced smart TVs. Amazon's second-most-popular TV is a 40-inch Roku TV made by TCL and selling for $300. (A 55-inch version runs $600.) In addition to a straightforward interface, Roku has a universal search function that shows if a movie or TV program is on any of its dozen most-popular channels. Roku also has a Siri-style voice search interface (though it's still rough.).

And Roku is just one smart-TV system. LG, Samsung, Vizio and others provide slick interfaces, too. Were Apple to jump into the game, it might look like a me-too product. Comparing smart TVs to smartphones, it would be as if Android had come out before the iPhone.

If Apple does have a better idea, it can still bring it out with a new Apple TV set-top box, which, according to longstanding rumors, is a virtual certainty this year (possibly even next month). Rumors also say that Apple will introduce an online streaming-TV service, and this is a place where things can get much better.

The only big player right now is Sling TV (which is only tangentially connected to Sling Media and the Slingbox). Sling TV (see review) is great primarily because it's the only thing out there. (Sony's better-looking, more-expensive PlayStation Vue is available in only three cities so far.) Sling TV was the first way for people to watch ESPN, AMC and several other cable networks online. But its interface looks much more like one from a cable TV box than one for cord-cutters. It has no DVR capability and limited (though growing) on-demand options — for some channels (ESPN being one of the exclusions). Getting from the cable/satellite-box-style interface to the on-demand options requires an unintuitive set of scrolling maneuvers that are not clearly indicated. Also, Sling TV can play on only one device (TV, smartphone, PC, etc.) at a time.

Some of these weak points, like no DVR, are likely the result of restrictive content-licensing deals with TV networks. Apple has been a pioneer in negotiating better deals for content, as it did first by setting up iTunes and then by offering MP3 versions of songs, free of copy protections, that can play in any device. Apple's also done a decent job getting content on the Apple TV. For a long time, Apple was the only one offering streaming HBO shows (albeit a year after they aired), and it was first to offer the new HBO Now full streaming service.

Still, there's much more to do to make online TV better, including improvements in pricing, availability and ways to find content. People have already bought about twice as many Apple TVs as Roku players (roughly 20 million versus 10 million), presumably for a reason. Apple TV hasn't had a major update since 2012. It's unlikely Apple hasn't been doing anything in the meantime to make the experience better. And we may soon see what that is.