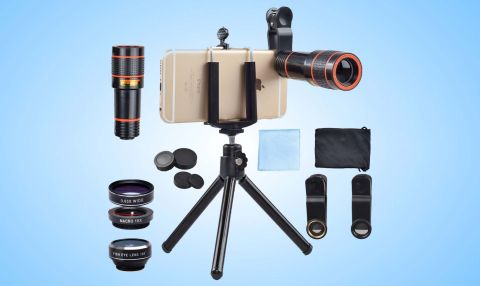 Despite this kit's full complement of accessories and its telephoto zoom, users may be better off looking elsewhere for a cell-photo lens kit.

On paper, Apexel's smartphone lens kit has it all: a mini tripod; a cellphone-holder attachment with ball head; a 12x telephoto lens along with 0.63x wide-angle, 198-degree fish-eye and 15x macro lenses; two lens clamps; front caps; a micro-fiber cleaning cloth; and a carrying pouch. Given all the accessories, the price isn't bad, but overall, this kit was extremely disappointing.

While it's great that Apexel includes the cellphone holder with a ball head to keep the camera and lens steady on the included tripod, it was difficult to get them all to work properly. The ball head would slip on occasion when I tilted the smartphone, and the tripod is a little too flimsy.

For some of the shots, I used either a Joby GripTight One micro stand ($19) or a Manfrotto MTPIXI-WH PIXI mini tripod ($29). Both were designed to hold smartphones and provided a much sturdier base than the tripod bundled with this kit.

There are no rear caps for any of the lenses, so there's a slight chance that the optics will get scratched or smudged when they're stored in the kit's pouch.

We tested Apexel's lenses with an iPhone 8, but according to the company, the kit is also compatible with the iPhone X, 7, 6/6s Plus and SE, as well as phones from Samsung, HTC Google, Huawei and LG.

The good news is that the 0.63x wide-angle lens is sharp in the center. Everywhere else in the frame, though, the image becomes very blurred. The soft fall-off is extreme, almost mimicking the effect found with a Lensbaby.

Some people might find the blurring interesting, but we think it's just a sign of the lens' poor quality. The curvature usually found with wide-angle lenses is kept to a minimum, though.

Even using a sturdier mini tripod than the one that came with this kit, it was difficult to get good macro test shots. The 15x macro lens is very thin and low-profile.

It's almost flush with the lens clamp, making it difficult to position it close enough to the subject to get a detailed shot. The focus point is quite small, too.

Our 198-degree fish-eye test shots were relatively sharp in the very center of the image. But the rest of the image was quite blurry around the circular perimeter.

Edges showed anomalies like haloing and chromatic aberration along high-contrast edges. Lens flare and reflections were evident when the sun was in or near the frame.

The large, 12x telephoto lens was problematic. I often needed to make a couple of adjustments to center it over the camera lens to avoid cutting off part of the field of view. I also found it difficult to focus. Sometimes the act of turning the focus ring moved the lens itself; other times, it was difficult, if not impossible, to see whether the shot was in focus.

Even when I was able to focus the lens, the images simply were not crisp. You may be better off zooming in with your camera phone or cropping the image after you shoot. Granted, you'll lose some megapixels from cropping, but your images will be sharper than those shot with this lens.