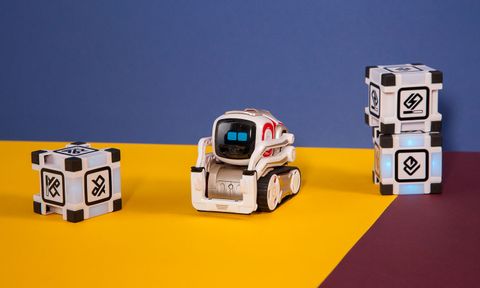 Anki's Cozmo is a cute robot plaything that can teach basic coding ideas, but it relies far too much on a smartphone or tablet.

A little robot is my new best friend; I love it and it loves me back. At least, I'm convinced that it does. Anki's Cozmo ($179.99) is the most adorable, playful toy I've seen in my life, and it brought me ridiculous amounts of joy while I tested it, even though I'm almost 20 years over the recommended age of 8 and up. Cozmo played with me (it's a sore winner), learned my name and the names of my friends, and tried, in a simple way, to teach me how to code in a rudimentary, block-based language. If you can stomach the price for this toy, it's great for a kid who may be interested in tech. I only wish it didn't rely so much on its dedicated smartphone app.

Cozmo is a cute little thing, a robot with treads like a tank, arms like a backhoe, a voice like Wall-E and wide, blue eyes like a child. Its white, silver and red plastic construction makes it feel like you shouldn't play with the toy too hard, but it survived many a drop off of my desk.

A little camera on Cozmo's face helps him recognize his environment. The toy greeted me after I trained it to recognize my face (and after it learned my name. "ANN-DROO," it purred) and it also enjoys playing with its favorite accessories, three blocks with a special pattern. Cozmo uses the blocks for tricks like stacking and rolling as well as playing games.

The 128 x 64 display on Cozmo's face shows only the colors black and blue to portray the robot's emotions (as well as the Wi-Fi connection information), and they're adorable. Whoever animated Cozmo's face got right to my heart with the toy's gleeful happy faces and sad doe eyes looking at the ground when it lost a game. Also adorable: when it "sneezes" and gets the hiccups.

The robot's other big accessory is its proprietary charger, a cradle with two contacts that Cozmo stands on — or sleeps on, anyway. When you put the toy to rest through the app, it closes its eyes and lets out a few snores.

Cozmo has its own CPU, used to evaluate what the toy should do next. But the majority of the user-based computing is done through the Cozmo app, which is available on iOS and Android and in the Amazon app store.

The first thing the app makes you do is connect your phone or tablet to Cozmo over Wi-Fi. The robot itself never connects to the internet, but it needs Wi-Fi because that offers more bandwidth than what you can get with Bluetooth. Cozmo creates its own secure network, and you have to connect to this network every time you start the app, knocking you off of your own home network.

The app has a list of daily goals to help you earn Energy, which levels up Cozmo and gives you more Bits (to unlock new modes) and Sparks (a sort of currency to keep you playing). These goals range from playing for a certain amount of time to making Cozmo do specific actions.

A sidebar in the app lets you "Spark" specific actions, like asking the machine to stack its cube toys or offer a fist bump. There's also a bunch of apps, including a series of games like Keepaway, Explorer Mode to control Cozmo remotely and the Code Lab. These aren't all unlocked from the start, though, so you'll have to earn Sparks to gain access to all of the features.

My biggest issue with the whole toy is that it's based completely on the app. Cozmo can't do anything without a smartphone. If your child doesn't have a device of their own, prepare to start giving yours up regularly.

After your child has played with Cozmo for a little while, they can learn about programming, using the app's Code Lab feature. This uses MIT's Scratch programming language, a drag-and-drop system in which you line up action-based blocks to control the robot. It's a simple language that's too easy for adults, but kids will whittle away hours with new sequences.

The current version of Code Lab allows kids to write only programs with "horizontal grammar," which means the blocks go from left to right and therefore don't allow for more complex sequences. However, MIT says that young children find horizontal code easier to use, and Anki says that it targets the Cozmo at children as young as 6 years old. Since the blocks have icons rather than words on them, children can learn to code before they know how to read. An update with more-complex blocks and vertical grammar is coming in the fall.

In my trial with the Code Lab, I decided to make Cozmo dance with a cube. That involved turning the toy's backlight blue, scanning for a cube, approaching the cube, picking it up, turning it 90 degrees four times (which I put in a shell that makes it repeat twice, effectively having Cozmo spin around), putting the cube down and backing away. Other actions in the Lab include specific voice commands, facial recognition, animal impressions and various emotional states.

The drag-and-drop block language isn't always the most accurate. It can be difficult to drop blocks exactly where you want in the chain, and it's not always easy to reorder them. But the system is simple and detailed enough to keep kids engaged for a long time.

Most of the other modes consist of a series of games. My favorite is Keepaway, in which players offer Cozmo a cube and pull it away before the robot can tap it. The most complex is Memory Match, in which you tap the blocks in a longer and longer pattern, seeing if you can remember it longer than the robot. There's also a mode in which, in exchange for some energy, you can get Cozmo to say anything you want. (Except for anything in its extensive dictionary of inappropriate words. Believe me. I tried.)

You can also force most of Cozmo's actions at any time, though it's not always able to follow through. Sometimes, it's not as smart as I would've liked. It occasionally missed blocks it wanted to pick up or knock over, circling around or giving up.

If you prefer, you can take complete control of Cozmo in Explorer Mode. Of all of the functions, this is the one that makes best use of your phone. Explorer Mode treats Cozmo sort of like an RC car, letting you drive it around, move Cozmo's head and pick up cubes with his lift. The app acts as a live feed from the robot's cameras, so you can see through its eyes.

The controls are a little funky, mostly because you have to turn your phone to turn Cozmo, while everything else consists of virtual buttons and sliders on the touch screen.

I got a fair bit of distance, driving Cozmo about 30 steps heel-to-toe before it completely lost connection (it did struggle a bit before that). If you follow Cozmo around, though, you won't have that issue.

Anki's Cozmo is a toy first and foremost, but one that you'll fall in love with. The robot can teach some very basic coding concepts, though it's not exactly a STEM course. And the play lasts only as long as you're willing to have the app in the foreground on your phone or tablet.

Still, the mix of robots, light coding and a bouncy personality might be enough to push your kids into tech, or at least get them comfortable with it, and adults will fall in love, too.