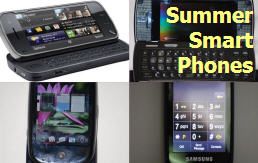 5 Smart Phones: the Instinct, the Impression, the enV Touch, the Pre, and the N97

Last month, we looked at two phones that offer an alternative to the typical Blackberry or other business-oriented productivity handsets. This month, we look at and test a different breed: the all-in-one mobile device. These are mobile phones that were designed to go above and beyond what a typical smart phone can do.

The iPhone is a great example of this product category, but we’ve seen so much of it, that, to be frank, we’re wary of overkill. With AT&T’s vice grip on Apple’s device, changing services or upgrading may be out of the question for large swaths of consumers. However, for this article, the iPhone 3GS was the standard against which we tested the other phones.

We tested five recently released phones to see if they could match or better the iPhone in features and performance. Here are the five devices we looked at:

Each phone has unique features, so we tested them both individually and against each other (when appropriate) in a multitude of lab and real world tests. We looked at speed, functionality, design and service.