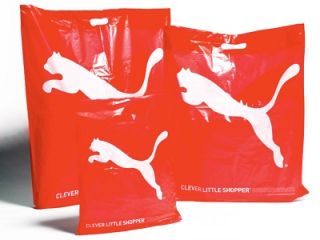 Don't be confused by their red color, Puma is going green by swapping out its plastic bags with its brand new 100% biodegradable 'Clever Little Shopper' bags. Although they look just like plastic bags, they are created almost entirely from cornstarch, allowing the bag to naturally decompose within three months. Check out the video below and you will also see its ability to be dissolved in water in about three minutes!

Back in 2010, Puma began its eco-friendly ways by announcing that it would stop using red shoeboxes and adapt its 'clever little bag' project. This eco-friendly service saved approximately 8500 tons of paper, 1 million liters of water, 20 million megajoules of electricity, and 1.5 million liters of fuel oil and diesel. The company's new 'Clever Little Shopper' is estimated to save an additional 192 tons of plastic and 293 tons of paper each year. Let's hope other companies will adapt similar strategies for reducing their carbon footprints!