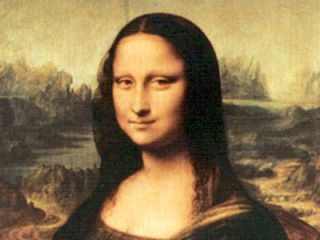 Researchers have recently made astounding new discoveries in the Mona Lisa painting displayed at the Louvre Museum in France. They now believe to have determined that the eyes of the Mona Lisa bear a secret code, known to most of us as 'The Da Vinci Code' thanks to best-selling author Dan Brown.

Although Leonardo da Vinci had painted this picture roughly 500 years ago, researchers have only now found that within Mona Lisa’s right eye clearly shows an “LV” (plausbile da Vinci’s initials).  The left eye, however, is not so easy to decipher, though without a doubt also holds symbols.

Another interesting discovery unveils part of the bridge in the painting’s background as showing the number “72” which could also be read as letter “L” and the number “2.”   Researchers are positive that they can exclude any fake, dirt or destruction on the painting creating these signs and thus are convinced that this is indeed the secret code of the master himself.

Researchers were led to this revelation and have focused on the eyes, having read an antique book that states that there were secret signs in the eyes of the Mona Lisa.

Another mystery that they are hoping to answer is whether or not there is any truth to the claim that Leonardo da Vinci painted a self-portrait in the Mona Lisa.  An Italian research group is seeking permission from authorities to exhume da Vinci’s body and based on his skull, reconstruct his face to validate this as fact or simply myth.  If it turns out to be true, however, this would undoubtedly add more mystery to the Mona Lisa.

These new discoveries could finally begin to unlock the master’s secret code and hopefully unveil the messages Leonardo da Vinci left behind half a millennium ago.