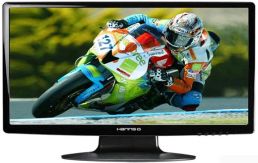 Like the majority of LCD monitors, the HH251P tends to struggle with films. Blacks are washed out because of its weak contrast ratio.

Because there's no real image correction, upscaling is rather mediocre. You're better off with a dedicated source to do that for you.

This monitor from HannsG represents a very strong challenge to some of its competitors.

The HH251HP is a 25-inch screen with a Full HD (1920x1080), 2 ms TN panel inside and two HDMI ports on the outside, all for the price of a basic 22-inch 5 ms monitor. Given it's low MSRP, you might think that it would only have a rather minimal set of features, but you'd be wrong!

The hardware features include two 1.5 W speakers, a VGA port and two HDMI inputs.  That means you can connect several sources to the monitor at once, such as a computer, a games console and a DVD player.  If your computer only has a DVI output, there's no need to panic, as HannsG includes a HDMI to DVI adapter. The outside of the monitor is pretty basic but attractive enough.  As is often the case, it includes glossy black plastic at the front and a matte finish behind.  Only the stand serves to remind us that this is a cheaper screen, because it neither rotates nor turns from side to side.  That's why it only scores two stars in this section.

This is the first HannsG monitor that we've tested, so some of you might be wondering who's behind this company.  Well, its name comes from the Taiwanese manufacturer HannStar, which despite being relatively unknown, has grown since 1998 to become the world's fifth-largest supplier of LCD panels for computer monitors.

Using its default settings, the colors on the HH251HP are accurate, and our measurement showed that the monitor had a deltaE score of 2.5.  That's a very good result, but you can improve it even further.  You need to access the Color menu and change from 'Natural' to 'Warm', which causes the colors to reach a deltaE of 2.1.

If colors are this monitors's strong point, then having deep blacks is definitely its weakness.  A good screen should get down to 0.1 cd/m², producing a contrast ratio of 1500:1.  Here, the HH251HP is a little behind the average with blacks at 0.3 cd/m² creating a contrast ratio of 711:1.  Black areas appear a slightly lighter shade of grey, as you can see in the test card above.

The HH251HP is a responsive screen that produces the 2 ms response time that HannsG claims for it.  However, the most observant viewers might notice a very small amount of black ghosting, as you can see on the photo below.  This reverse ghosting, a shadow effect, is not as pronounced as on some Philips and Iiyama monitors that we've recently criticized for this problem.

As well as being responsive, the HH251HP has a low enough input lag to allow you to game without any problems.  With an average delay of less than one frame, this monitor won't have any effect on your multiplayer performance.

With accurate default colors, responsiveness to rival the best of the bunch and 2 HDMI inputs and 1 VGA:, HannsG has created a screen that's excellent value for money. There are better options out there, of course, but they cost a lot more.