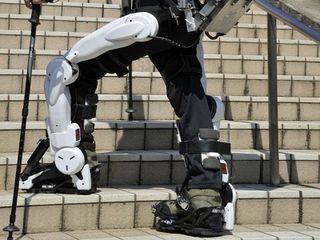 How does a man that is paralyzed from the waist down climb a massive mountain? By being carried the entire way using a cybernetic exoskeleton of course! Seiji Uchida became paralyzed from the waist down after a car accident 28 years ago. Since then he has dreamed of climbing a mountain but it wasn't until Tsukuba University professor Yoshiyuki Sankai developed the Hybrid Assisted Limb (HAL) that it would be possible.

Although this isn't the first exoskeleton type of device to be developed, the HAL system is a good indication of the giant strides that have been made in the field of cybernetic technology. The HAL suit is capable of increasing the wearer's strength up to tenfold, making the task of carrying someone up a mountain not as daunting as it sounds. Next Tuesday, Seiji Uchida and his partner will tackle the challenge of scaling Mont Saint Michel, a World Heritage site in France.

With the field of cybernetics in Japan beginning production of bodysuits that augment and increase mobility and strength, a world of Iron Man-like suits for industrial and military use may not be too far in the future. They may not fly and shoot plasma blasts out of their hands yet, but who knows what the future holds.