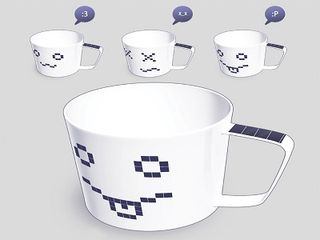 Designed by Nikita Mokhirev, the "Smile Cup" is another great entry from Designboom's Fujitsu competition "A Life With Future Computing". This cup is an interactive cup that is capable of displaying customizable emoticons, sending instant messages, displaying the time, or even functioning as a miniature game center.

With wireless technology capable of modifying the cup to display names, customer bills, or advertisements, the Smile Cup is capable of assisting in just about any situation imaginable. From the cup itself, users are able to select different pre-customized faces using the touch sensor located on the handle. Utilizing Bluetooth technology in conjunction with the touch sensor will allow users to use the cup as a remote for controlling mp3 players or cell phones.

In addition to displaying cute emoticon faces, various cups from around the world will be able to communicate with each other by sending and receiving information via Wi-Fi connections. The smile cup is quite an interesting concept that has potential to get some more use out of our mugs than sipping coffee and tea. Let's just hope that pouring a nice hot cup of coffee won't fry the "brains" of the cup.