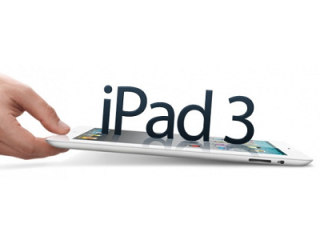 Apple's iPad 3: What Should We Expect?

Apple’s iPad flipped the tablet world upside down in 2010, but thankfully the accelerometer kicked in and the image righted itself.

Seriously though, the original iPad, and 2011’s iPad 2, are due some credit for transforming Apple into one of the most financially successful companies of this still-young millennium. The original was virtually by itself in 2010, with no real competition in sight. When Android tablets like the Motorola Xoom finally started shipping in 2011, the iPad 2 arrived shortly thereafter, packed to the gills with a dual-core CPU, powerful GPU, exceptional app offerings, and a solid ten hours of battery life when put to the test. Most Android-based offerings could match the iPad 2 in one or several areas, but it took months for some legitimate competition to finally surface. And some contenders did indeed hit the market in the spring and summer, including the Samsung Galaxy Tab 10.1 and the Acer Iconia Tab A500. Extra features like USB and HDMI ports called to potential buyers, while Android 3.0 (also known as Honeycomb), came into its own after several updates.

As it stands today, the best tablet available is indeed an Android device. Unless you’re already married to Apple’s services and software, the Asus Transformer Prime tablet is the killer device, with its quad-core Tegra 3 internals, Android 4.0 (or Ice Cream Sandwich) operating system, fantastically bright display, and best-in-class 8 megapixel camera. Of course, there’s a pretty good chance you already own an iPad 2, and shifting from an iOS to Android is no easy task – and you can kiss your entire app collection goodbye. Odds are you’re waiting on the next iPad, as the migration from one iOS device to another is – in theory – pretty painless.

So when will this Cupertino Unicorn (trademarked, patent pending) emerge from the clouds and drop onto your laps and into your faux-hipster messenger bags? That’s where the rumors, and our predictions, come into play. We’ll be looking at every other aspect of this mythical-but-soon-to-be-very-real tablet, including its design and physical specs, internal hardware (CPU, GPU), optics, and display.