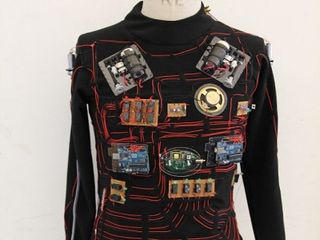 Hoping to study and explore the relationship between risk and emotions, designer Dan Watson created an intriguing device known as the Anxiety Suit. Designed to connect emotional states with risk, Watson's project hoped to discover whether or not humans could accurately assess the magnitude of risks and willingly modify their behavior.

After applying his knowledge from criminology studies and behaviorism, Watson was able to create a device that could induce feelings of anxiety into the wearer. The levels of anxiety varied depending on different combinations and degrees of stimuli.

Although the suit is still in development, it is already capable of provoking emotional responses based on different symptoms such as skin sweat. The resulting reaction in this case was described as a thrilling sensation similar to those on a roller-coaster ride.

The thought of a suit alone being capable of manipulating our emotions can be quite fear provoking, but Watson hopes that his suit will help researchers in the field of neuroscience and psychology to better understand human behavior and physiological responses. The Anxiety Suit is by no means a mind control device, but manipulating our emotions may be getting dangerously close. Read more about the device on Watson's page.