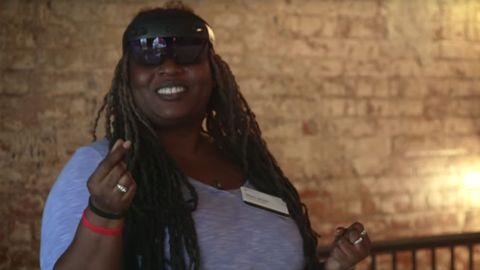 My early adopter senses are tingling. Microsoft has just announced that Hololens 2 is available for sale, for the low, low price of $3,500. Targeted at the enterprise sector, Hololens 2 has improved on most of the limitations of the original augmented reality headset. It’s more comfortable, offers a wider field of view as well as eye and hand-tracking. And after a few demo sessions, I really want Microsoft to hurry up and make a consumer version.

Hololens 2 design: Lighter than ever

Out of the many AR and VR headsets I’ve tried, Hololens 2 is definitely in my top three as far as comfort goes. According to Greg Sullivan, director of communications at Microsoft, Hololens 2 is three times more comfortable than its predecessors. I’m not sure how the engineers and designers came up with that number, but what’s important is that it feels true.

Putting the headset on is easy enough and once you adjust the fit via the large knob on the back, the device feels well balanced. Instead of over-encumbering the front or back of the headset, Microsoft placed the Qualcomm 855 SOC and battery at the rear of the device with the all the sensors placed in the front. I never felt my head being weighed down in one direction or the other, but I’m curious to see how it would fare with an hour of use.

Aside from the comfort, the other notable feature of the headset is the visor, which can be flipped up in case you need to fully engage with the real world. It’s lightweight and swings up and down, easily latching into place.

Microsoft is onto something with its eye and hand tracking for the Hololense 2. It’s near seamless, fast and responsive. When I put on the headset, I got a notification stating that Hololens 2 needed to measure my eyes. Instead of just measuring for interpupillary distance, the embedded sensors took a 3D scan of my eyes while I used my peepers to follow the movements of some colorful gems. The implementation reminded me of Tobii’s eye tracking technology. However, it’s unclear if Microsoft employs the same methods.

Whatever it’s doing, the result is a fast and responsive system. Scrolling down to read a longer passage was as easy as well, reading. When my eyes got to the end of the sentence at the end of the virtual page, it simply scrolled down so I could continue unabated.

Eye tracking also helps to make one of the more mundane features of Windows gain some cool points. Glancing at my left wrist, I noticed I had gained a virtual tattoo of sorts in the form of the Windows logo. Tapping the glowing spot on my arm summoned the Windows Start Menu, allowing me to launch various programs.

And for those moments when I had to reach out and touch something, I raised my hands and — boom! — I was clicking buttons like they were really there. I also had the ability to resize a nearby model of a wind farm by pinching the ends and either stretching or contracting the model. It was a very natural experience, although I definitely wanted some haptic-enabled gloves or something to give me some kind of feedback.

Hand tracking with the Hololens 2 does take some getting used to, as there were times the tracking was a little more exacting than I was expecting, causing me to reposition my fingers to grab on to the edges.

The main difference between VR and AR is that the former takes place in a closed environment that shuts out the outside world. AR and MR (mixed-reality) create a virtual overlay within the real world. And with the Qualcomm SOC and sensors, the virtual models created are mapped to a specific location and remain there even if you aren’t interacting with them. That meant when I went to observe a model of a working jet turbine, the wind farm I mentioned previously was still hovering above the real-life table where I left it.

In terms of graphical fidelity, it really depends on the program. Some models like the the jet turbine looked more animated rather than photorealistic. And the colorful hummingbird that came to become my favorite Windows 10 demo was pretty but was made up of a series of triangles that while pretty, would have been even more impressive if it were an actual hummingbird. And I do wish the holograms possessed a deeper opacity as it would up the immersion factor. But that’s one minor quibble.

I’m just glad I’m able to see more of holograms period. A major improvement that Hololens 2 has over the original headset is the field of view. Microsoft has increased it from 16:9 to 3:2, which meant that the models didn’t disappear the second I looked off to the left or right. It also allowed for a bigger play space. Allowing the wind farm to hover in the background as I went to Mars, mapped a path for a proposed landing and exploration route for a probe and then drew rings around the planet, turning it into a rudimentary Jupiter.

Microsoft had several demos lined up, each more interesting than the last. I started with the wind farm and the jet turbine and transitioned to the digital hummingbird. I was intrigued by the bird since it did a great job of showing off the hand and eye-tracking capabilities. By looking at one of the jeweled objects in the program, I could choose where the bird would roost. Extending my hand palm out was the signal for it to quickly fly over to my hand and hover so I could get a better look. It’s an endearing mascot and a good introduction for all of the tracking options.

And similar to Hololens 1, there’s a space-themed program that created the craggy red likeness of Mars’ surface. Pinching my fingers together summoned a pen that allowed me to add some virtual graffiti to the planet’s surface and even add rings.

But as fun as this was, the third-party apps Microsoft set up were some of the most intriguing peeks at how Hololens 2 will be used for enterprise. The first, done in partnership with Italian furniture company Natuzzi, was a high-end take on the Wayfair AR app. After picking out a sectional or accent chair, I could place it in my theoretical living space to see how it looked. In addition, I could choose the material (leather or velvet) it was made out of as well as the color. And when I went in for a closer look, I could either see the fine grain of premium leather or the luscious sheen of velvet. Natuzzi plans to use the app in several ways.

A customer can essentially come off the street and view furniture in a virtual space, complete with IRL swatches to get a sense for the true color and feel of the product. The other demo is a little more personal and tasks the consumers with downloading the app and taking several photos of the room they’re planning on redecorating. Using the app, a faithful 3D recreation of the room can be created and yield a more accurate representation of your dream room.

My favorite demo by far was Spatial, which might be the ultimate meeting app. Able to support 20 Hololens 2-wearing participants, Spatial allows you to conduct virtual meetings with anyone no matter where they are. What I love about this is that the app compiles pictures of you from the internet and creates a 3D scan of you for your in-app avatar. Even better, there’s a smidgen of face-tracking, which allows your mouth to move as your talking and simulates eye contact for that real meeting feel.

Similar to other meeting apps, you can give slideshow presentations, show off charts and even do collaborative projects. But unlike those apps, there's also voice search and 3D drawing, which allowed me to create a list of whiskeys I’d like to try in the near future.

I only got a small taste of Hololens 2 and I’m already chomping at the bit to see how it will fare in the real world. But at $3,500, the target audience is clearly limited for now. Microsoft is hard at work tweaking the technology with the hope of bringing mixed reality to the masses. But for now, the headset will be found in only the coolest offices and retail shops, much to my chagrin.