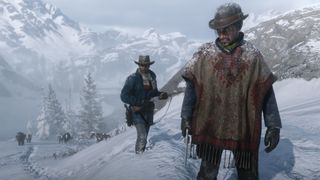 Red Dead Redemption 2 has finally landed on PC today (Nov. 5), but PC gamers eager to dive into Rockstar's open-world Western might want to wait before pulling the trigger. According to a large portion of players across the web, Red Dead Redemption 2's PC port is having a ton of critical issues, from crashes to poor performance.

Our friends at TechRadar seem to have run into the game's most prevalent issue: it simply won't launch. Numerous press outlets as well as Reddit users report getting an error message that reads "The Rockstar Games Launcher exited unexpectedly" before directing people to the Rockstar Games support page.

Even after following all of Rockstar's instructions and testing the game on both AMD and Nvidia graphics cards, reinstalling it and updating all necessary drivers, TechRadar had no luck launching the game.

On top of failing to launch, Red Dead Redemption 2 is crashing unexpectedly for many users, as a separate Reddit thread points out.

Finally, while this isn't a game-breaking issue, it appears that players are having trouble maxing out Red Dead 2 even on high-end graphics cards like the Nvidia GeForce RTX 2080 Ti. That's the card you'll need for a solid 4K, 60 frames-per-second experience, but even then Nvidia recommends that you tweak certain graphics settings to medium.

What to do now

According to Rockstar Support, you should update your graphics drivers if your PC copy of Red Dead Redemption 2 is crashing unexpectedly (though some users have reported that this isn't fixing the issue). PC Gamer also reports that disabling your anti-virus program could prevent the game from crashing.

Rockstar has told Polygon that its actively working on a fix for the crashing bug. But if you haven't bought Red Dead Redemption 2 for PC yet, you might want to wait until an official patch has been released before you download it to your gaming PC or gaming laptop.