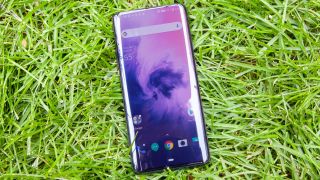 Pictures of the rumored OnePlus 7T Pro, the follow up to the OnePlus 7 Pro, have surfaced online.

The leaked images, courtesy of SlashLeaks, give the closet look at the device we've seen yet. Through the case we can tell the device is Nebula Blue, a color that debuted with the OnePlus 7. It doesn't seem like OnePlus changed the design of their flagship, but you can take a look for yourself.

OnePlus' 'T' series tend to focus on hardware improvements rather than aesthetics. There's no information about what might be inside this Android phone, but rumors suggest it will feature the powerful Snapdragon 855 Plus processor.

The performance of the OnePlus 7 Pro's Snapdragon 855 impressed us when we reviewed it (making the device one of our top smartphone picks), so an upgraded chip would only enhance an already-awesome smartphone.

As with any leak, you should view these images with a skeptical eye. If OnePlus sticks to its launch cycle, it means we're still around three months out from the OnePlus 7T Pro's launch.