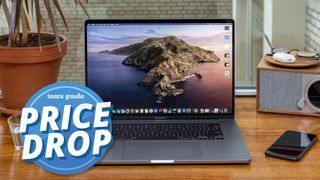 For a limited time, Best Buy is taking $100 off all MacBook Pro 16-inch laptops. After discount, prices start at $2,299.99. It's the first time Apple's new laptop is on sale and one of the best Apple deals we've seen for this machine. There is a small catch. You must be a My Best Buy member. However, membership is free and gives you exclusive access to deals (such as this one).

Despite packing a bigger 16-inch screen, the new laptop is just 2% bigger than the 15-inch MacBook Pro. The system's 6-speaker sound system raises the bar for laptop audio thanks to its powerful sound and beefy bass. Meanwhile, the new Magic Keyboard, which takes inspiration from Apple's desktop keyboards, has a much softer feel and offers more travel than Apple's previous-gen Butterfly keyboards.

Looking for more holiday deals? Be sure to follow our Cyber Monday deals coverage for the best holiday sales.