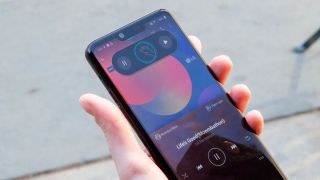 Buttonless smartphones have yet to take off, but manufacturers are looking towards this trend as a future design direction. And the latest confirmed phone maker to be considering this option is LG.

According to a patent newly published by Korean patent office KIPO (via LetsGoDigital and TechRadar), LG has designed a phone without a power button or volume rocker switch. The illustrations also show some normal smartphone features, like a headphone jack, a waterdrop notch for the front camera, and four rear cameras.

A second LG patent still features buttons, but instead has a single rear camera surrounded by a ring. The patent doesn’t describe what the ring does, but reasonable guesses for its purpose would be a new flash design, or part of an optical zoom system.

According to Twitter tipster Ice Universe, Samsung had tried a buttonless Note 10 design, but it was not reliable enough for production.

Chinese manufacturer Meizu pitched its buttonless phone, the Zero, on Indiegogo for crowdfunding earlier in 2019. However, the campaign closed in March having managed to secure less than half of its funding goal.

An early Google Pixel 4 rumor said that phone may feature a buttonless design, but those murmurings subsided once Google leaked images of its own upcoming phone.

Other manufacturers that have already patented buttonless phones include Xiaomi, Samsung, as well as Vivo with its Apex concept phone.

The disclaimer that should be kept in mind whenever patents are involved is that they only thing you can confirm from them is intent. LG may never make a phone that looks like either patent, even if it would be an exciting step forward. But a successor to the LG G8 could include these features.