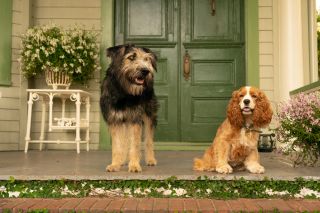 Lady and the Tramp (2019) is the seventh recent live-action adaptation Disney has released — following Cinderella, The Jungle Book, Beauty and the Beast, Dumbo, Aladdin and The Lion King — and the first to be released only on the company’s streaming platform, Disney Plus, launching Nov. 12. It’s also the fourth to be released in 2019 alone.

That is a lot of anthropomorphic CGI animals in one year, folks.

So in a year of box office successes but critical failures on the Disney live-action remake front, how does Lady and the Tramp fit in?

Disney’s live-action problem — and ours

I haven’t met anyone, casual fan or critic alike, who has genuinely raved about any of the new Disney live-action movies, but I have met plenty of people who have seen most or all of them.

I’m guilty too. I’ve seen more than half of them, and until this review, I watched them for “fun” — and I saw them all in theaters to boot. Based on box office numbers, many, many of us are seeing them in theaters: With the exception of Dumbo, they have all made between $200 and $540 million. But why, if we don’t find the movies particularly satisfying or entertaining, do we continue to see them?

Spectacle, sure. Talented casts, usually. Nostalgia, most definitely. But after so many neutral to bad theater experiences — and especially after watching Disney’s latest venture, Lady and the Tramp — I think I’m prepared to put them down for good.

Plot spoilers for Lady and the Tramp (2019) to follow, but trust me, you already know the story.

The setup for the new Lady and the Tramp is very much the same as the animated film: An affluent husband buys his wife a cocker spaniel named Lady. After the wife gets pregnant, she and her husband pay less attention to Lady. Lady feels lonely and befriends street dog Tramp, who shows her the real world outside the confines of her fence, eats some noodles with her and falls in love with her.

It’s all very classic-feeling and innocuous, but allow me to get straight to it: Lady, the Tramp? They’re unsettling to say the least, downright scary to say the most. And that’s coming from someone who can find the cute in a lot of weird animal things. Porgs, yes, adorable. Happy Feet? Extremely my thing. Even baby Simba from this year’s live-action Lion King got me. But these dogs are none of that. When Lady starts looking and talking more like, well, an actual lady than a dog, it’s just a truly bizarre experience, despite Tessa Thompson’s best voice efforts. And it doesn’t help that these more realistic-looking dogs still flirt and fall in love.

The 1955 animated film of the same name worked because, duh, it was animated. The whole world around them was a cartoon, so it was easy to find the cuteness in the story and their humanlike personalities. But there’s something so uncomfortable about watching this story unfold in a real-life setting with more realistic animals that I was straight-up dreading the spaghetti scene that I knew was coming. It is uncanny valley to the extreme, like watching 102 minutes of a Bill Hader – Tom Cruise deepfake video but with talking dogs.

I know I’ve been speaking in extremes about what should just be a casual family film, but honestly, I can’t imagine parents or kids enjoying this very much. While the CGI may not be as unsettling to a child, the film is so poorly paced that I can’t imagine they’d have much fun watching it. The first act drags, with not much happening in the way of action or fun chase scenes (of which there are admittedly a few toward the end), and the communication between the dogs isn’t especially funny or interesting either. If I were a kid, I’d be bored to tears; Air Bud this is not.

That said, it was extremely smart of Disney to include it as a day-one Disney Plus launch. I can see many parents scrolling through the Disney Plus library during the Thanksgiving holiday and landing on Lady and the Tramp: no trip to the theater, no expectations, no hassle. Disney knew it wasn’t Aladdin or The Lion King “big” to warrant a theatrical release, but it’s the easiest thing to stream the heck out of during holidays with the fam.

Really, though, with hundreds of Disney Plus shows and movies and shows to stream, you can easily choose something better instead.

What to keep leashed

Nightmare-fuel dogs and boredom aside, the film had some lovely shots, particularly when Lady and the Tramp go off on their own adventures together. The dogs looking out at the city and enjoying the music of a band from the top of a boat helped drive home the vastness of the world from beyond Lady’s owners’ backyard. It looked so nice, in fact, that when both Lady and the Tramp eventually end up back home again, I couldn’t help but almost feel bad for them. Sure, they’ve been given newfound love by their family, but now their world just got a whole lot smaller again — and this time with a crying baby in it. (Ugh, humans suck.)

When Lady’s owners go out of town and leave Aunt Sarah in charge of dogsitting her, Aunt Sarah’s two cats get loose, destroy the house and pin it on Lady. The nonplussed, dog-hating Aunt Sarah is such a fun caricature, and while the cats are even more disturbing to watch than the dogs, the song they sing while wrecking the house is really fun.

Of course, the classic themes of class divide are still present and timely, which is important to include in a children’s film, and the choice to cast a woman of color as Lady’s owner, and as Lady herself, made the previously very white film thankfully more inclusive.

I also loved Sam Elliott as Trusty the bloodhound because...Sam Elliott...as a bloodhound. How could you not? It just makes sense.

Loyalty belongs to the dogs

Around the film’s midpoint, Tramp and Lady take in the sights of the city from atop a hill. When Lady wonders if she can see her home from there, she becomes sad. She misses her dog-friends and her owners. To that, Tramp says that people can’t ever be as loyal as dogs, and that she shouldn’t be sad because her family has already failed her. While humans may never be as loyal as dogs, they can still be loyal to a fault.

We’re extremely loyal when we continue to watch Disney’s live-action movies because we crave nostalgia. We want to revisit these stories from our childhoods that in some part helped shape the way we look at the world and how we interact with one another. We want to experience the magic that Disney movies made us believe in, and while there’s nothing inherently wrong with that, there’s an emptiness present when these timeless tales are made into money-making blockbusters that care more about special effects than heart.

While Lady and the Tramp (2019) may be just an inoffensive remake meant for casual family viewing, it’s also the fourth in an assembly line of big-budget live-action Disney films out this year that have largely sapped the magic from the originals we remember. And they won’t stop, but we can.