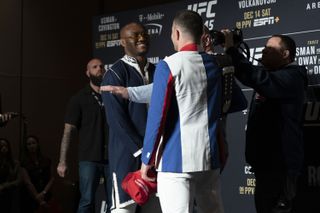 There have been plenty of big-time fights this year in the UFC, and now, the mixed martial arts league is ready to end the year with a major welterweight fight between Kamaru Usman and Colby Covington. This isn't one you'll want to miss, so we've assembled a guide on how to live stream UFC 245.

Usman is the current UFC welterweight champion, and he’s facing Covington, who served as the former interim champion. The winner of the bout should be able to prove which is the superior welterweight fighter. It should also help to lay out how 2020 will look in what has quickly become a crowded welterweight division.

But the Usman-Covington fight is far from the only big fight of the night. And when the bouts kick off from the T-Mobile Arena in Pasadena, Calif. on Saturday, December 14, there’s a good chance you’ll have hours of exciting fighting.

If you want to catch this big night in MMA, here's how to live stream UFC 245.

Like other big UFC events, watching UFC 245 will require you to have some access to ESPN and perhaps even UFC’s own Fight Pass in order to watch the fights you want, starting at 6:15 p.m. ET on Saturday, December 14.

Like other big UFC nights, UFC 245 starts with the early prelims, which will air on ESPN+ starting at 6:15 p.m. ET.

After that, the preliminary card will kick off at 8 p.m. ET on ESPN 2, so you’ll need to go to your television or favorite streaming service to watch those fights. At 10 p.m., go back to ESPN+ to watch the main card.

Here’s a fight breakdown for the night:

If you're traveling outside the country during UFC 245, you'll still be able to watch it. A virtual private network, or VPN, can help you connect to your desired streaming service through a U.S. server and watch the draft as if you were at home.

ExpressVPN: Express VPN can access more than 3,000 servers spread out across 160 locations in 94 countries. The service performed reliably in our testing, and we found customer service responsive.

How can I live stream UFC 245 without a cable or satellite subscription?

If your goal is to watch every fight on Saturday, you’ll first need to sign up for ESPN+, a $50-per-year service that streams sports games in both major and minor sports leagues, as well as UFC fights. But since UFC 245 is a PPV event, you’ll need to pay $80 to get a year of ESPN+ and the main card fights. If you’re already an ESPN+ subscriber, the PPV will cost you $60.

Since UFC 245 is an all-ESPN affair, you’ll want to make sure you subscribe to streaming services that work with ESPN 2. Again, ESPN+ is simple enough, and since it works on a variety of devices, you shouldn’t have any trouble getting it set up.

But if you want to watch the preliminary fights on ESPN 2, you’ll need to choose one of the options below:

How can I watch UFC 245 with a cable or satellite subscription?