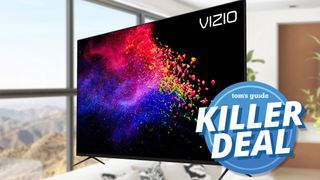 Vizio offers some of the industry's best TVs for the money. And if you're looking for a TV deal that you can still get in time for the holidays, here's a Walmart deal you shouldn't miss.

For a limited time, you can get the 2019 Vizio 55-inch Quantum 4K Smart TV for $378 at Walmart. Traditionally, this 4K TV is priced at $498 so that's $120 in savings. It's the lowest price we've seen for this TV and $20 cheaper than its Black Friday price, which makes it one of the best TV deals you can get right now.

Vizio 55" M-Series Quantum 4K TV: was $498 now $378 @ Walmart
The Vizio M-Series (M556-G4) TV is part of Vizio's midrange 2019 series, but this set features Vizio's quantum tech, which is similar to Samsung's QLED TVs. It's an absolute steal at this new super-low price.View Deal

Although we didn't review this specific model, we did take a look at the similar Vizio 55-inch M-Series Quantum 4K TV and we loved its vibrant color, local dimming, and HDR performance.

In real world testing we watched Spider-Man: Homecoming and colors on the M-series TV looked true to life. Fast action was also very smooth, with none of the choppiness you might run into on some affordable sets. The 60Hz display ably kept up with fast-paced action, whether it was Spider-Man swinging through the city or a Replicant fistfight in Blade Runner 2049.

As with many Vizio TVs, the model on sale at Walmart has built-in Chromecast functionality. This is an added treat for anyone that has a phone full of streaming apps, since it allows you to cast the app right to the TV without any loss of performance. This TV also adds support for Apple AirPlay2, letting you share just as easily from your iPhone or iPad.

Keep in mind, you have until Dec. 22 at 11am PT to get this TV shipped in time for the holidays.