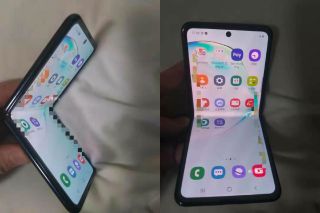 After the debacle that came with its first foldable phone, Samsung is hoping that the Galaxy Fold 2 can avoid the problems that plagued the original Galaxy Fold. But newly leaked images of what could be the Fold 2 show a familiar design. Maybe too familiar.

The Fold 2 isn’t meant to be a range-topping device like the original, but a more affordable foldable that will sell for less than $900 according to recent rumors.

Where things start to look dicey is the hinge. If you look at the image above, you’ll see that the folding part of the phone juts out much like the Galaxy Fold’s does. Rather than the compact and well sealed mechanism used by the Fold 2’s main rival, the Motorola Razr 2019, this kind of hinge seems more exposed. We hope that Samsung made some changes we can’t see to the hinge, otherwise we could see history repeating itself.

The other major problem caused by folding mechanisms is the ugly crease it causes across the display. While there’s only one of the leaked images that shows the phone fully extended, it’s hard to see where the crease is on the bright display wallpaper. It could be disguised by the image, but perhaps Samsung has managed to improve something since the original Fold.

If you want to learn more about this second generation of Samsung foldable, our round-up of Galaxy Fold 2 rumors is a great place to learn more.