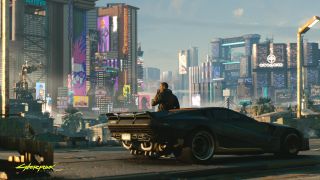 Polish game developer CD Projekt Red earned international fame and fortune with its acclaimed Witcher series, and it would have been easy for the company to rest on its laurels. Instead, after three Witcher games (and a few spinoffs), the company is ready to try something totally new: Cyberpunk 2077, a futuristic, first-person adventure in a bleak dystopia where you can make things better — or simply make them better for yourself.

Whether you've been following Cyberpunk 2077 since its very first announcement back in May 2012, or are just learning about it as the release date draws closer, there's a lot of information to take in. Here's what you'll need to know before you start your own William Gibson-style odyssey into the near future.

A bit of breaking news: CD Projekt Red just pushed Cyberpunk 2077 back to Sept. 17, 2020 (a full 5 months after the original April 16 date). In the announcement, CD Projekt Red co-founder Marcin Iwinski & head of studio Adam Badowski said the game is "complete and playable," but they want "more time to finish playtesting, fixing and polishing."

Cyberpunk 2077 is slated to hit PC, PS4, Xbox One and Stadia, and cost $60 on each platform, unless you go for the ultra-fancy collector's edition. That one costs $250, and includes a whole bunch of knickknacks: a collectible statue, an art book, a soundtrack, a "visitor's guide" to Night City and a whole bunch of other various and sundry stickers, pins and postcards.

Cyberpunk 2077 has been in development for a long time, and there are a number of trailers available, with varying levels of story and gameplay details. At the time of writing, this is the most recent one is the E3 2019 Cinematic Trailer, which CD Projekt Red debuted on June 9, 2019:

(Yes, this is the one with Keanu Reeves. Enjoy.)

The rest of the trailers and behind-the-scenes videos can get pretty granular, depending on whether you're interested in story, gameplay, music or promotional events. So if you want to watch more, I'd recommend that you simply check out the official Cyberpunk 2077 YouTube channel.

Those who have played the latter Fallout games and similar titles should have a pretty good idea of how Cyberpunk 2077 will work. You play as V: a mercenary in the dystopian Night City, who starts off the game by running small-time missions for various criminals and semi-legal operations. Where the story goes from there depends very much on your choices, as it's (probably) not possible to keep every single faction in Night City happy.

Because you can create V from scratch, you can also customize the way you'll tackle the game's challenges. You can pump points into ranged weapons and simply play the game like an extremely long first-person shooter, but you don't have to. You can wield melee weapons, talk your way out of problems or hack electronic systems to do your bidding. Many quests will offer multiple resolutions, depending on both your skills and the type of character you want V to become.

While Cyberpunk 2077 looks like a pretty deep game, the central gameplay conceit is pretty simple: Build a character. Specialize in the skills that interest you. Use those skills to solve a variety of plot and side missions. Gain experience and money to improve your skills and gear. Shape the narrative with certain big (and small) choices as you go. If you've played CD Projekt Red's Witcher series, the basic concept should be familiar; just swap out a fantasy world for a cyberpunk one.

For those who aren't up on the tabletop role-playing game scene, CD Projekt Red did not spin Cyberpunk 2077 out of whole cloth. Instead, the video game is based on Cyberpunk 2020: a pencil-and-paper RPG first released in 1990, and still in print today. If you've ever played Shadowrun, it's a bit like that, except a bit grittier and more down-to-earth, as there's no magic or nonhuman playable races.

If you're of a tabletop mindset (and really, if you like sprawling, nonlinear, choice-and-consequence video games, you very well may be), you can pick up Cyberpunk 2020 in hard copy at R.Talsorian Games, or in PDF form at DriveThruRPG. While the tabletop game doesn't mirror the video game exactly (the latter is set 57 years later, for one thing), you'll at least get a general sense of the world, the skills and the tone of the game.

Better yet: When April 2020 has come and gone, you'll be able to continue your Cyberpunk adventure beyond the digital screen.