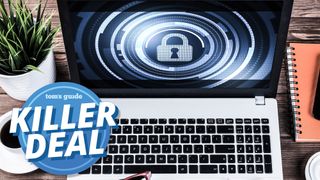 Many of the best antivirus software makers, including Bitdefender, Kaspersky, McAfee, Norton, Sophos and Trend Micro have great deals for you this month.

We've got six of the best, tailored to different needs. If you're a Windows user without small children, Bitdefender Antivirus Plus might be the perfect thing for you. If you do have kids and want a jack-of-all-trades package, try Norton 360 Deluxe.

Power users with many devices on different platforms should opt for Kaspersky Total Security,  McAfee Total Protection, Sophos Home Premium or Trend Micro Maximum Security. All of these packages offer excellent protection against malware on Windows and macOS, and most throw in Android and iOS software as well.

Bitdefender Antivirus Plus: was $60 now just $24 @ Bitdefender
There's no better choice for entry-level antivirus software, and right now it's steeply marked down at the Bitdefender website. The discount covers your first year of service for up to three Windows PCs.View Deal

Trend Micro Maximum Security: was $100 now $39 @ Trend Micro
Trend Micro's premium suite has excellent protection and a ton of features for either five or 10 devices. It's marked down by up to 70%.View Deal

McAfee Total Protection: was $120 now just $39 @ McAfee
One of the best deals in antivirus software is now even more of a steal. For Cyber Monday, pick up McAfee's full-featured Total Protection for 10 PCs, Macs, Android or iOS devices for just $39.99 for the first year.View Deal

Sophos Home Premium 1-year: was $60 now $30 @ Sophos
Sophos is well known in the enterprise security market, but its consumer antivirus products are fast, efficient and affordable. This month, you can get Sophos Home for up to 10 Macs or PCs for just $30. View Deal