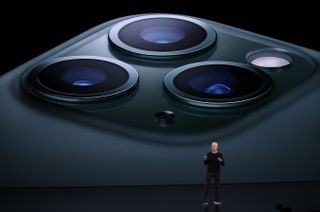 Apple celebrated a strong fiscal fourth quarter, reporting today (Oct. 30) that it had tallied $64 billion in sales for the three months ended Sept. 28. That's a record for the quarter, and it was driven by "accelerating growth from services, wearables and iPad," CEO Tim Cook said.

That's because Apple saw iPhone sales fall during the quarter, dropping 9% from the previous year to $33.4 billion. The drop isn't actually surprising — iPhone sales have been shrinking during 2019. More important, Apple's fiscal fourth quarter includes the months leading up to the company's fall iPhone 11 launch, when shoppers were least inclined to buy a new smartphone because they know what's coming.

iPhone 11: Why Apple is bullish

Still, Apple has a reason to be optimistic about its iPhone fortunes rebounding. The 9% drop in sales is actually a "meaningful improvement" over previous quarters, chief financial officer Luca Maestri told Wall Street analysts during a briefing announcing the company's quarterly numbers. Phone sales fell 12% during the third quarter and 16% for the first half of 2019.

What's more, Apple executives sound pleased about the launch of the iPhone 11 lineup. (Those phones debuted Sept. 20 so Apple's fourth-quarter numbers reflect a little more than a week of sales.) The iPhone 11 "has quickly become our best-selling iPhone," Cook told investors and the iPhone 11 Pro and Pro Max are getting a good reception as well.

Look no further than Apple's projected revenue for its holiday quarter, when it figures to reap the biggest reward from this fall's iPhone launch. Apple told analysts to expect $85.5 and $89.5 billion in revenue for the October-to-December quarter. Even the lower end of that range would be an improvement from the $84.3 billion in sales Apple reported for the December 2018 quarter, a period when Apple actually had to warn investors that it was going to miss iPhone sales targets.

"You can tell from the guidance we are bullish," Cook said.

Still, if you wondered why Apple seems particularly enthusiastic about wireless earbuds, credit cards and TV programs starring Jennifer Aniston, the breakdown of Apple's revenues explain why. Both wearables and services enjoyed big gains in revenue during the quarter.

Services in particular rose 18% over last year to $12.5 billion in the fiscal fourth quarter. For the entire fiscal year, Apple saw $46 billion in revenue from its services, which Cook was quick to point out is the size of a Fortune-70 company.

Apple says its payments business set a record for revenue, with Apple Pay revenue and transactions more than doubling during the quarter. Apple also rolled its Apple Card this quarter, with Cook hailing the debut as the most successful launch of a credit card ever in the U.S.

With Apple TV+ and its original programming launching this Friday (Nov. 1), Apple's looking forward to wading into the streaming service wars. (It's unclear how much of an impact Apple TV+ will have on the company's bottom line initially, as anyone who's bought an Apple device since Sept. 1 gets a free trial for a year.)

As for wearables, sales in that segment rose 35% over the year-ago quarter to $6.5 billion, meaning Apple's smartwatch and audio equipment business is nearly as large as the Mac, which saw sales dip 5% in the quarter to just under $7 billion. And those numbers don't reflect today's release of the AirPods Pro, the $249 wireless earbuds that offer noise cancellation, water- and sweat-resistance and a new design.