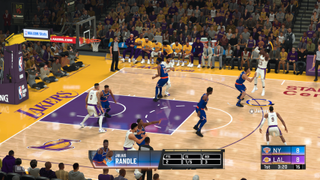 Lace-up your Jordans; it's time to take the court in NBA 2K20. But before you do, you'll want to brush up on your skills.

After all, the NBA 2K franchise isn't considered the most true-to-life basketball simulator without reason. NBA 2K20 is brutally punishing. Take an extra step and you'll get the ball stripped from your hands. Try throwing up threes under pressure and you may as well start running back to defend.

But don't worry; practice makes perfect as long as you know where to start. So before you start lobbing air balls and fouling out, here are some NBA 2K20 tips and tricks to improve your game on the court.

You're never too good for 2KU

There is no replacement for practice. NBA 2K20's 2KU mode is a fun, low-risk way to get better at your game.

I'm partial to the main tutorial feature, which runs you through dozens of controls for attacking, shooting, defending and free throws. If you prefer less guidance, 2KU also lets you play in a scrimmage or just free style on the court. 2KU is one of the most comprehensive tutorials in sports video games, and a must try for new players.

Get your shot timing down

We can't stress this point enough. Just like in real life, if you want to be a pro basketball player, then get out on the courts and shoot the ball.

In 2K20, timing is everything. To nail a swish, press and hold the shoot button (the right stick or X on Xbox) and release when the shot meter is full. Getting that timing down takes some practice, especially because the meter fills at different rates depending on who is shooting the ball and how open the shot is.  However, I went from hitting about 30% of field goals to around 60% after a few hours of practice.

Unless you're 100% sure you've got the timing down, resist the urge to press the contest shot button (Y on Xbox and triangle on PlayStation).

Why? Because if the shooter fakes his shot or takes another step before shooting, then you've either committed a foul or completely taken your defender out of the game. Instead, hold the right analog stick up to raise your hands. This will put pressure on the shooter but without the added risk.

Get in your opponent's face. There is nothing more frustrating for an attacking team than playing against defenders who don't give an inch of space.

Just be smart about when to add pressure. If you push too hard, you could end up fouling or running into a pick that you can't recover from. To crowd the ball holder, hold the left trigger button (LT on Xbox or L2 on PS) and move the left analog stick in the direction of the defender.

Pick and roll should be your go-to play

It's one of the oldest plays in the book and also one of the most effective in 2K20.

To execute a pick and roll, hold LB (or L1 on PS4) and wait until your teammate moves into the position between you and the nearest defender. Your teammate's pick should open up some space for you to run into and make a drive toward the basket. Pick and rolls are easy to run, don't take a lot of time off the shot clock, and are great for creating space between you and a stifling defense.

Manage your AP in MyGM

MyGM now gives you a limited number of AP, or action points, per day.

Just about everything you do in the mode costs AP, including playing games, chatting with players and changing staff. This new change to the beloved game mode is sure to upset some players, but you can alleviate any frustration by being smart about how you use your Action Points. We recommend mixing it up -- talk to players and coaches to keep their morale up and only play games against tougher opponents.

Your first assignment in 2K20's MyCareer story mode is to create a player. This is a complicated but important task that requires some research if you want to make the very best player.

First, you'll need to decide a player's position. This is entirely up to you. Of course, if you like shooting from the outside, then chose a shooting guard or point guard. If you prefer rebounding and dunking then go with a center.

Next, match the skills breakdown pie chart with your player's position. For example, shooting and point guards should select the chart with the most shooting, play-making and finishing attributes.

From there, you'll need to choose a physical profile. Again, you'll want to match that profile with the position of your player. So if you're a point guard, go short and light, and if you're a center, go tall, strong and heavy. All of these decisions will determine how many points you can allocate toward your player's skills categories.

Once you make it to the "Set your potential" screen, you'll be given a certain amount of upgrade points to allocate toward different skills. We recommend maxing out the Shooting and Finishing categories for shooting guards, while giving some Playmaking points to points guards. Centers will want to spend most of their points in the Defense/Rebounding category.

Power forwards and small forwards are the most versatile players, and, therefore, should be given balanced attributes.

When you take a 3-pointer, make sure it's with Steph Curry and not Kevon Looney. Conversely, Looney gives you a better chance at winning a rebound than Curry, so make sure the big man is in the paint after every shot.

The bottom line is this: 2K20 is a simulator, which means it mimicks real life, so know your players and use that knowledge to your advantage on the court. If you don't watch a lot of NBA, then spend some time looking at 2K20's comprehensive player stats to determine each of your player's strengths and weaknesses.