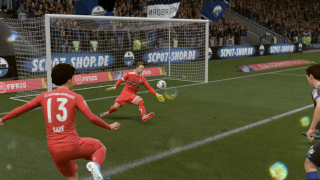 From the new arcade-style Volta mode to improved gameplay mechanics, there are plenty of reasons to pick up FIFA 20, the newest installment of EA’s beloved soccer franchise. But there are a few things you should know before you lace up your boots, so we’ve put together a guide to help you.

Here are 10 essential tips and tricks that will make you a better FIFA 20 player both on and off the pitch.

Not only do you learn a lot from it, but you love coming back over and over again. Easily the best tutorial in any sports game, FIFA 20’s Skill Games run you through a series of challenges, each at varying difficulties.

The Skill Games mode will teach you how to shoot, move, pass and defend --- everything you need to know before you take the pitch. We recommend starting with the basics by doing bronze challenges before working your way up in difficulty to gold drills.

The best defensive advice we can give in FIFA 20 is the same thing your first soccer coach ever taught you: Don’t dive in.

Instead, stand up an attacker by jockeying, or holding down L2/LT. This will keep your defensive player goal-side of the ball but still on their toes so they can make a quick move if needed.

If, and only if, the attacker makes a move toward you, then either use the tackle or slide tackle button to take the ball from their feet. It takes a bit of patience, but will greatly improve your defending skills.

Use timed finish for long-distance shots

Timed finishing was first introduced in FIFA 19 as a new skilled-based method for taking shots. Similar to shooting a basket in NBA 2K20, timed finishing requires you to press the shot button at exactly the right moment. It’s not easy, so you won’t want to try this with every shot (I find it unnecessary for short- and mid-range shots).

However, a well-timed shot can greatly improve your chances of going upper-90 on a long-distance kick. In fact, it’s so good that a lot of people have criticized the timed shooting feature for being unfair. If that doesn’t sit well with you, then feel free to skip it. Otherwise, it’s time to start practicing.

There is no shortage of ways to pass the ball in FIFA 20.

Instead of there being one definitively overpowered passing method, your best bet is to get comfortable executing every type of pass and knowing which is best in each scenario.

For example, when your player is making a run past the defensive line, you should use either a lobbed or on-the-ground throughball. However, if the teammate you want to pass to is stationary then you might want to use a standard pass. And if they’re far away, use a driven pass (RB/R1 + A/X).

Every good coach knows the strengths and weaknesses of their players.

If you want to get the most out of your team then you need to know who is on the pitch and which position they play. The attribute you need to remember most is footedness. Shoot with your player’s non-dominant foot and you should expect the ball to either sail wide or dribble helplessly into the arms of the goalie.

Also be aware of a player’s height -- there’s no need to cross balls lofted at Messi, he’s not going to get a head on them. Speed, ball control and tackling also play a major part in how your players behave on the field, so be sure to study their stats as closely as possible.

The first thing you should do when starting a new career mode as a manager is hire three 5-star scouts.

Be sure they have a maxed out rating for judgment and experience because that will determine how likely they are at discovering a player with special potential. Once you’ve hired scouts, immediately send them to a country to start looking for talent.

Don’t let young prospects sit on the bench while your veteran players take the field every weekend.

If you have a young player on your team who isn’t getting many play-time then put them up for a loan transfer. A loan is when a player moves to a different club for a certain amount of time (typically one year) then returns to their original club when that period ends.

In the end, everyone wins: the team who loaned the player gets their services, the player gets minutes, and you end up with an improved youngster whose morale didn’t drop from warming the bench all year.

You only want to buy or promote young players who have high potential.

Figuring out a player’s potential requires a bit of knowledge. There are three different phrases FIFA 20 uses for indicating potential, or a player’s maximum rating ceiling. Here is what they are and what they mean for youth players:

Showing great potential: A player who can grow to a rating between 80 and 84.

An exciting prospect: Can grow to a rating between 85 and 90.

Has potential to be special: Can grow to a rating of 90 or higher

At the club since... : This means a player is too old to be considered a prospect.

There is no real need to spend your hard-earned cash on FUT packs.

Yes, they can wield some good results, but like all loot boxes, player backs are a huge gamble. Instead, we recommend buying players from the auction market.

Keep tabs on the auction market and be persistent, you’ll eventually win the player cards you want.

Because these small-sided matches are 3v3, 4v4 or 5v5, it is more important than ever to keep your shape.

You are asking for the opposition to score when you pull the last defender up the field. Same goes for when you are double-teaming an opposing player and leaving their teammate wide open on the other side of the arena.

Our best advice is to identify the opposing player you are meant to mark and stay as close to them as possible. Only break away if you see the person in possession start sprinting toward an open goal.