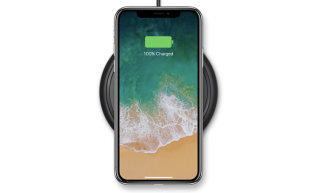 Months of rumors leading up to Apple's iPhone 8 announcement hinted that wireless charging was coming to the Cupertino, California, company's smartphone lineup. But many analysts predicted that Apple would choose a proprietary standard rather than the widely used Qi (pronounced "chi") charging standard, like it did with its Lightning charging port.

However, the iPhone 8, iPhone 8 Plus and iPhone X use Qi after all, which means that the standard is about to become more widespread than ever. Here's everything you need to know about Qi, including how it works and why the new iPhones could be the devices to finally take wireless charging mainstream.

What is wireless charging?

Charging a device wirelessly means you don't need to plug it into a cable to juice up the battery. Instead, you lay it on a charging mat or puck, which is itself plugged into an outlet. The inductive charger transfers power to the device. The Wireless Power Consortium has established the Qi protocol, which dictates how the charger and the device work together, but all you need to know is that Qi chargers work with Qi devices.

How is wireless charging useful?

Think of every time you've been in a restaurant or airport while your phone is on its last leg, wishing you had a charger on hand. Qi chargers are already in hundreds of thousands of public locations around the world, and with more than 90 smartphones from major manufacturers now supporting the standard, you can expect more businesses to start installing charging mats to lure in customers.

We confirmed with Apple that you'll be able to wirelessly charge all three new iPhones without removing their cases, and the same is true of many other smartphones, including the Galaxy S8.

Which smartphones use wireless charging?

Of the 90+ smartphones that use the Qi standard, many are high-end handsets. Aside from Apple's new iPhone 8, iPhone 8 Plus and iPhone X, Samsung's Galaxy S8, S8+, S8 Active, Note 8 and some past generations of those devices all support wireless charging. LG's G6 and Motorola's Moto Z, Z Play, Z2 Force and Z2 Play all support wireless charging, too (the Motorola devices via moto mod).

What if I already have a wireless charger? Will it work with Apple's new iPhones?

Yes, if it is Qi certified. The Wireless Power Consortium ensures that every charger that claims to use the Qi standard actually does. You'll know if your charger is OK to use if it has the Qi logo and says "Qi Certified" on its packaging. It's easy to find cheap wireless chargers that say "Qi compliant," "Qi compatible" or "Works with Qi," but these are not legitimate and should not be used to charge your devices.

What are the dangers of using a non-Qi-Certified charger?

The Wireless Power Consortium says these knockoff chargers are prone to overheating, which could damage your phone, your phone case or even your skin.

Do I need to use wireless charging?

No. Every device that offers wireless charging also offers a standard charging cable method. But it sure is convenient. Wireless charging is especially useful in a car, where you can install a charging mount and have easy access to your smartphone (while keeping your hands on the wheel and eyes on the road, of course).

Wireless charging in the new iPhones will also solve the problem of not being able to use your Lightning EarPods while your device is plugged into a charger. This is a big complaint among Apple aficionados who miss the 3.5mm audio jack.

If I buy a new iPhone, do I have to use Apple's wireless charger?

Apple actually doesn't include a wireless charging mat in the box with its new iPhones, so you'll have to buy one separately. The company is selling Made for iPhone-certified wireless chargers from Belkin, Mophie and others in the Apple Store.

Apple is making an AirPower charging mat that can juice up to three devices at once: the new iPhone, the Apple Watch Series 3 and a new Qi-compatible AirPods charging case. It's unclear when the new charging case or AirPower mat will be available to purchase.