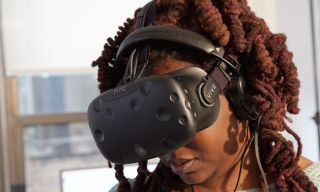 If you like the idea of not only using your hands in the virtual reality world but being able to walk around in it, the HTC Vive is the VR headset to get. In our HTC Vive review, we said it delivers an "unrivaled virtual-reality experience with crisp graphics, accurate room tracking and intuitive touch-enabled controllers." If you're ready to take a plunge — and you have a PC with enough horsepower to support HTC's headset — here's how to get your hands on the $799 device.

Where to Buy a Vive and Where to Demo

The simplest way to get your hands on a Vive is to buy directly from HTC. The company is currently taking orders for its headset, though you will need to have some patience as well as a credit card or PayPal account: As of now, orders placed through HTC are expected to ship in May 2016.

You may be reluctant to pony up $799 without first being able to test out the HTC Vive for yourself. Not to worry: You can head to HTC's retail partners for to try out the Vive and place an order if the experience lives up to your expectations.

Microsoft will offer Vive demos at some of its retail stores, staring with its outlets in New York, Bellevue, Wash., and Salt Lake City, Utah. A Microsoft store in Lone Tree, Colo., outside of Denver will add Vive demos shortly, with more availability spreading to more stores throughout April.

HTC says up to 30 Microsoft stores will offer Vive demos this year. Demos at the stores will feature some of the 120 titles currently available through Steam, and you'll be able to place reservations for June orders at the store.

You can also head to select GameStop locations to see Vive demos. HTC says its headset will be showcased at 10 of the video game retailer's locations by mid-Apri, where you'll be able to see the kind of virtual reality content available through Steam. HTC says its will post a schedule of demos on its website.

Before you order your Vive, you should make sure you have the hardware to support HTC's headset. The Vive requires a powerful gaming desktop PC powered by either an Nvidia GeForce 970 graphics card or an AMD 290 GPU; you'll also need at least an Intel Core i5-4590 or AMD FX 8350 CPU and 4GB of RAM. Your PC will need an HDMI 1.4 or DisplayPort 1.2 video output as well as one USB 2.0 port.

HTC's website lets you test your PC to see if it's up to snuff, while also listing optimized systems. And HTC has promised to offer bundles featuring its headset and Vive-optimized PCs, though those bundles aren't yet available on the company's website.

As we found in our HTC Vive review, you're also going to need some space — at least a 6 x 5-foot area — so that you can wander freely around the Vive's virtual world.

The Vive ships with more than just the headset. You'll also get two wireless controllers, a pair of base stations to measure spatial data, a link box that connects the headset to your PC and a set of ear buds. HTC also bundles Job Simulator, Fantastic Contraption and Tilt Brush by Google with the Vive.

MORE FROM TOM'S GUIDE: Oculus Rift vs. HTC Vive - Which Is Better?