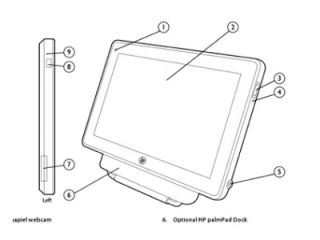 FoxNews has reportedly acquired spec sheets for HP's upcoming tablet, the PalmPad, from a "trusted source." These sheets indicate that HP is manufacturing four models, three of which will be showcased at CES 2011 taking place in Las Vegas next month.

According to the report, the three consumer-based models appearing at CES 2011 use webOS v2.5.1 and have minor hardware differences. They are reportedly similar to Apple's iPad under the hood although they'll feature additional features such as a mini-HDMI port, a 1.3MP front-facing camera and a 3MP rear-racing camera (both with LED flashes), a USB 3.0 port and the "multi switch" as seen on the Palm Pre.

The fourth model not slated for a CES 2011 appearance is said to be designed for university students. This version provides a 8.9-inch screen and access to a university's internal educational software. Although the hardware specs weren't revealed in the report, universities will have the option to customize the hardware. HP is hoping to launch the Student version just before Fall Semester 2011.

FoxNews also added that the three consumer models don't have finalized specs, and that the tablets may eventually sport a larger screen than the Student version. Ultimately HP plans to launch the consumer models sometime in March 2011, confirming Todd Bradley's previous statement that webOS-based products would arrive in early 2011.

As always, expect more details to unfold next month during CES 2011.