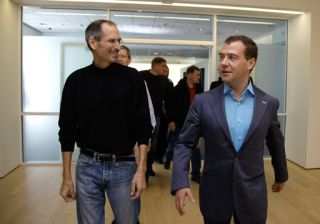 Last summer, Russian President Dmitry Medvedev visited Silicon Valley to learn more about one of America's unique tech hotbeds. Part of his trip included a stop at Apple, where he met with Steve Jobs and even got a special gift of an iPhone 4.

It was a nice gesture and a very cool souvenir to take away from Cupertino. Of course, that iPhone 4 is quite useless now in Russia, as Jobs gave Medvedev one that was locked to AT&T.

To be fair, all iPhone 4 models sold in the U.S. are locked to AT&T, even though there are factory unlocked models available just north of the border in Canada. We can only assume that Steve Jobs had one pulled right from the U.S.-specific stock.

A tweet from Medvedev's assistant confirms that the phone worked while in the U.S., but not in Russia. We assume that he's referring to using it on a local SIM card, as AT&T does roam in Russia.

It's time for Medvedev to seek out the local talent to inspect his iPhone's baseband to see if it's unlockable.