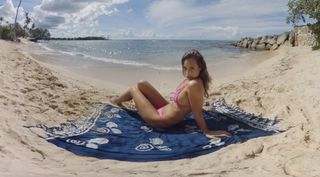 Ever wanted to be on the set of a Sports Illustrated swimsuit shoot? Now you can… sort of. Also, it's a big week for hip-hop in tech, as Kanye West has locked up his new album with Tidal while Lupe Fiasco just beat a Street Fighter legend. Here's what's trending.

Thanks to virtual reality, you no longer have to settle for just staring at static pictures in your annual Sports Illustrated swimsuit issue. The publication's new VR app for iOS and Android puts you right on the set of this year's shoot, allowing you to look around at the sunny skies and sandy beaches while some of the world's most gorgeous models get their pose on. The service is free for SI subscribers, while those without a membership can access the content for $1.99.  It might not be as cool as actually hanging out with them, but, on the bright side, you won't get sand in your pants.

People are saying lots of things about Kanye's new album, but "I just bought it on iTunes is not one of them." The rapper's new record "The Life of Pablo" is exclusive to Jay-Z's Tidal service, which has skyrocketed to the top of the App Store charts since its release. Yeezy himself tweeted "My album will never never never be on Apple. And it will never be for sale," though we'll have to wait and see if the polarizing MC can keep people using the music app past their free trials.

MORE: The Best Android Apps You're Not Using

The Internet is a magical place -- one minute, hip-hop star Lupe Fiasco is talking up his Street Fighter skills on Twitter; the next, he's got an official exhibition match set up with Daigo Umehara: the game's most legendary player. The big battle took place at a Street Fighter V launch event in San Francisco, in which Lupe somehow found a way to beat the mega-talented Daigo. Some are already speculating whether or not Daigo threw the match, but after seeing the mix of shock and childlike joy on Lupe's face after he beat one of his idols, does it really matter?

Coleco Chameleon Takes You Back in Time

One of the coolest new game consoles we've seen is actually something quite old. The Coleco Chameleon is a bona-fide gaming time machine, supporting the droves of classic ColecoVision games released in the 80s while offering a sleek new design and USB controllers. The Chameleon is launching on Kickstarter on Feb. 26; early backers can get it for $135, while it's set to retail for $150.

The leaks just keep coming as we approach the Galaxy S7's Feb. 21 reveal date. A leaked teaser from Samsung Indonesia reveals some key features of the upcoming flagship, including wireless charging, some sort of water-resistance and a curved edge variation a la the Galaxy S6 Edge. No big surprises here, but we're excited to see how all these features come together once Mobile World Congress kicks off.