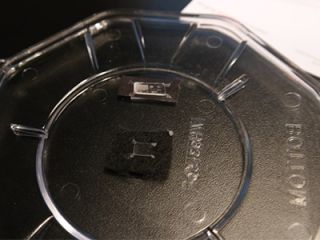 How small is your smallest camera? Even if it's a nearly-invisible spycam, your shooter will be huge in comparison to a new smart image sensor that's just 200 microns wide, giving it less girth than three human hairs. Developed in Rambus's imaging laboratory, the prototype is so small that it doesn't even have a lens, using algorithms to convert the spherical patterns of light it “sees” back into recognizable images.

At Mobile World Congress, Rambus Senior Research Scientist Patrick Gill, who developed the sensor, explained how it is able to capture photos and detect motion while demonstrating its ability to measure light.

Gill first showed us a chip that was very small, but still easily visible with the naked eye. However, he pointed to a drawing of the chip layout, showing that the active image sensor itself takes up just a small portion of that space. We found that portion almost imperceptible.

The sensor consists of a diffraction grating, which splits the light with a spiral-shaped optic pattern. As the light reflects off an object, it hits the sensor, passing through the pattern and the grating on its way to the CMOS imager where it arrives as a shaped blur of light. However, because the light has been turned into this spherical pattern, software can interpret this otherwise formless image and turn it into a fairly-accurate reproduction of reality. In a PowerPoint presentation, Gill showed us a photo of the Mona Lisa, followed by images of the optic pattern and light signal it produced and then finally a mostly-accurate reconstruction of the image made by the image sensor.

While it is capable of capturing light at all ends of the specturm, Gill's sensor isn't capable of high-res captures and there's always some blurring when when it reconstructs an image. The device does better when it's being asked not to capture images but to track light, something that would make it perfect for motion detection.

In a brief demo, Gill showed us how his sensor could capture light as he moved a device with the sensor on it as a spherical ball followed the motions in an application on his computer. He explained that the lensless sensor is even better than a regular camera at detecting the movement of the light, because it doesn't lose any pixels to focusing or oversaturation.

The tiny camera is not just an interesting parlor trick, but a potentially helpful innovation that could someday appear in everything from security systems that check your home for movement to wearable computers that rely on gesture control to medical imagery. At such a small size and without a lens, Gill told us the cost of the sensor should be very low, making it practical for device makers to embed it in their wares.

Right now, the smart sensor is just a proof of concept, but it could be coming to a device near you sometime in the future. We look forward to seeing where this technology leads.