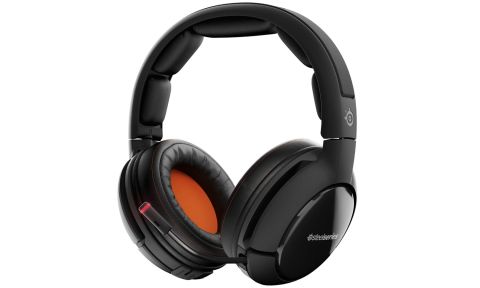 The SteelSeries Siberia 800 sounds great and works with almost any game system, but it's a huge pain to set up and maintain.

Do you own a PC, a PS3, a PS4, an Xbox 360, an Xbox One and a mobile phone? Do you have a single headset that works equally well with each one? If not, you may need a SteelSeries Siberia 800 ($300), an ambitious wireless peripheral whose defining feature is its perfect compatibility with every modern gaming system on the market. While setting up the peripheral and switching among devices can be a real pain, the Siberia 800 ultimately won me over with its superb audio quality and deep customization options. I can't recommend this headset for most people, but if you demand high-grade audio from each system you own, this peripheral is at least worth a look.

The Siberia 800's design won't exactly grab anyone's attention, but since you'll be wearing the device mostly at home, that's probably fine. The whole apparatus is black, with nary an engineering flourish in sight. The left ear cup hides a flexible, retractable microphone, while the right ear cup has a volume rocker that doubles as a controller for the headset console (more on this later).

There's a power button on the right ear cup that can also mute the microphone, as well as two jacks that allow the Siberia 800 to plug into either an Xbox controller or a mobile phone. The over-the-ear cups and plush, adjustable headband comprise a comfortable faux-leather material. Aside from a few SteelSeries logos, there's not much else to report.

The 11-ounce Siberia 800 took some time to grow on me, but it did eventually win me over. The headset is much tighter than I'm used to, even with its fairly generous adjustable headband. After a few hours, though, I realized that "tight" did not necessarily mean "uncomfortable." Even with my glasses on, I never felt any pain behind my ears, and the snug fit allowed me to walk around my apartment at will, never having to worry about whether the apparatus would stay put.

The ear cups themselves are soft and pliable, without ever getting hot or restrictive. I handed the peripheral off to a gaming co-worker, who agreed it was comfortable to wear for hours on end.

Setup: A myriad of cables

The Siberia 800 is a re-branding of the well-received SteelSeries H Wireless peripheral, which was built to work flawlessly with every modern gaming system. In order to facilitate this versatility, the device comes with a veritable rat's nest of wires to ensure that the Xbox 360, Xbox One, PS3 and PS4, along with PCs and mobile phones, each have a way to receive sound and transmit audio via the microphone.

There's no way to describe the initial setup for each system as anything other than "an enormous pain in the rear." The Siberia 800's instruction manual is not long, but every page has a detailed diagram of how to connect the headset to a given system, and each one has its own arcane set of rules and regulations. The Siberia 800 is a wireless headset, but it doesn't communicate via Bluetooth or a simple USB dongle. Rather, the device comes with a large amplifier that acts as a central hub.

But just plugging everything in is not enough to make it work. You have to go through a cumbersome system of menus on the amp itself (which, to the Sibera 800's credit, you can control with either the amp's buttons or a volume control located behind the headset's right ear). The menus are pretty intuitive, but adding each new source, fine-tuning the equalization and chat/game audio mix, and switching among them manually is a tiresome process, from start to finish.

Despite the amp's incredible versatility, you can really connect it to only one or two systems at a time. There's only one digital audio in, which means that if you want to connect the Siberia 800 to an Xbox One, a PS4, a TV and a living room PC, you'll have to fiddle around with wires behind your entertainment center each time. You can work around this process by connecting, say, one system via analog cable, one via digital audio and one via USB, but that also means you'll be sacrificing audio quality and a wireless mic on some systems. Furthermore, if you use the Siberia 800 in a living-room setup, good luck seeing the amp's tiny screen from the couch.

While there are a lot of things I dislike about the Siberia 800's amp and general setup, it doesn't deserve a blanket condemnation. Once you get things up and running, the audio options are agreeably versatile. Not only can you control volume and choose from presets for games, music and voice, but you can also adjust the level of chat, and even how much the game audio decreases when chat is active. You can also program your own equalization options, and set up preferred listening options for each system.

Once the Siberia 800 is up and running, it performs marvelously. The audio is crisp and clear across every genre, and you can fine-tune the equalization and chat to broadcast single-player adventures, chaotic shooters or chatty competitive games with equal fidelity.

Since SteelSeries prides itself on the Siberia 800's versatility, I decided to run the device through a variety of games on a handful of systems. I started with Uncharted 4 on PS4, in both single- and multiplayer modes. Following Nathan Drake on his adventures was a delight, as the rich soundscape made the rattle of gunfire, the heartfelt voice-acting and the stirring score come alive. Likewise, it was helpful for multiplayer matches, in which I could hear my opponents running and shooting in the distance, and fine-tune my mic just so.

To go old school, I tried Ratchet: Deadlocked on the PS3 and Halo 3: ODST on the Xbox 360. While both systems sounded great through the Siberia 800, connecting the headset to the PS3 was not as easy as described. Even after fiddling with the digital audio options and making the exact connections in the instruction manual, I could not get audio to channel properly through the device. I worked around this by plugging the digital audio cable into my TV instead, whereupon Ratchet: Deadlocked's gladiatorial arenas sounded phenomenal. Laser blasts, cartoony quips and the upbeat score came through equally clear, and strikingly balanced.

I contacted SteelSeries to see there was a fix for my PS3 issue. There was, although it involved fiddling with even more audio settings. The fix was simple, but not necessarily intuitive.

I also tested Heroes of the Storm on PC, to get a taste of what multiplayer, online, battle-arena games might be like. As on the console games, the Siberia 800 provided stellar sound for the voice acting, music and sound effects. Coupled with the excellent mic, the peripheral could be a strong choice for eSports aficionados (provided they don't mind carrying the amp around to tournaments).

The Siberia 800 is also a superb headset for everyday music and media listening, although for $300, it pretty much has to be. I listened to harpsichord concertos from J.S. Bach, Scottish folk ballads from Old Blind Dogs and hard rock from the Rolling Stones, and the Siberia 800 re-created each piece of music faithfully. I also watched a few episodes of Animaniacs on Netflix, and the experience has me thinking the headphones could really come in handy if I need to watch something without disturbing my roommate.

I didn't feel the need to tweak the equalization much, as the Balanced setting is exactly what it claims to be. Even so, the highs and lows came through in every genre, even when I used the audio cable rather than a wireless connection. Although the Siberia 800 is a bit big, it could still easily serve as your everyday pair of headphones.

The mic, too, is a masterwork — sometimes. In addition to using the Siberia 800 successfully during multiplayer matches, I called up a friend of mine in the United Kingdom on Skype to test the device during a normal conversation. She told me the Siberia 800's mic provided audio that sounded even better than that of my professional-grade Rode Podcaster, which is saying something. (I tested both again later, and the Podcaster is definitely the superior machine, but that they're even comparable is impressive for the Siberia 800). However, the mic didn't work nearly as well via standard audio cable; my co-workers told me that I was almost inaudible during a phone conversation.

Despite its unwieldy setup process, the Siberia 800 is an excellent headset for both gaming and music. Console gamers who want granular control over their equalization could get a lot out of the Siberia 800, as could PC gamers who'd rather deal with audio hardware than audio software. On the other hand, headsets like the Logitech G933 do almost exactly the same thing, at a much lower price and with a setup that's much less tedious.

Consider the Siberia 800 if your setup involves a lot of digital audio outputs and games that require fine-tuning in both the soundtrack and chat. Otherwise, you're better off with something cheaper and simpler.