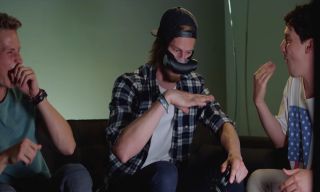 What's old is new again. Back in the 1960's Smell-O-Vision, a system that released odors during certain parts of the movie, first debuted -- and quickly went the way of the dodo. Over the years, it's come back in some shape or form, most recently at the 4D-screening of Batman vs Superman. But now the faddish tech has made its way to gaming thanks to the upcoming Ubisoft title, South Park: Fractured But Whole.

Set to release in December, Fractured But Whole is the sequel to the popular South Park: Stick of Truth. This time around the boys are LARPing as superheros looking to score their own show on Netflix. In the ensuing battle, there will be danger, drama and farts -- so many farts. In order to provide gamers with the full South Park experience, Ubisoft has come up with the Nosulus Rift, a peripheral designed to let players smell what's going on in the game. That means the flowers, Tweak's father's coffee shop -- oh who am I kidding? It's for the farts, it's always been about the farts.

Once the headset is securely fastened over your nose, you'll have the chance to smell every little poot and silent-but-deadly and their unique bouquets. I mean who wouldn't want to smell Cartman let one rip after downing a large burrito from Chipotle?

It's obvious that Ubisoft has put a lot of work into the Nosulus. The device features a pair of swappable aluminum N-Fragrant scented capsules, a Nosulus Air Pump Burner, dynamic lighting to further supplement your flatulence-fueled adventures and a Bluetooth connected electronic system.

And before you write the the Nosulus off as a cheap marketing ploy, keep in mind that Ubisoft is demoing this innovative piece of tech at Gamescom. They've also got a preorder page so you can be the first on your block to play the game of the future.

But seriously, this is one of the best marketing campaigns I've seen in awhile. Keep 'em coming Ubisoft.