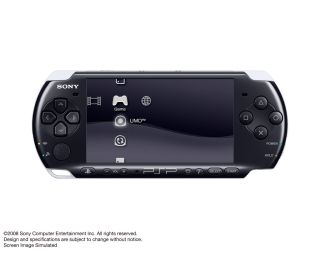 While nearly cosmetically indistinguishable from the slim and light PSP-2000 revealed last year, the new PSP-3000 boasts some significant improvements. Where the PSP-2000 made big strides in form factor, the PSP-3000 greatly upgrades the quality of the LCD display and adds a built-in microphone.

The new LCD is said by Sony to have "a wider color gamut and higher contrast to deliver deeper, more vibrant colors, as well as anti-reflection technology so you can see the screen more clearly when playing outdoors."

Completely new to the standard hardware is the new addition of a built-in microphone. Although PSP software does not integrate microphone functions into games the same way that the Nintendo DS does, the built-in mic will be welcomed by any Skype user.

Thanks to a software update, the PSP is now able to run Skype to make and receive calls over the Internet. Those who wished to use Skype on the handheld had to purchase a headset attachment for the external microphone. The PSP-3000 does away with this required accessory with the built-in mic, meaning that the user can use standard headphones of his or her choice.

A final noticeable, but practically insignificant change is the switch from the old “Home” button to a “PS” to match the look of the PlayStation 3’s SIXAXIS and DualShock 3 controller.

North American gamers won’t have to wait long for the arrival of this new model, with a $199 Ratchet & Clank bundle in October and the system alone in November for $169.99 as a core pack.