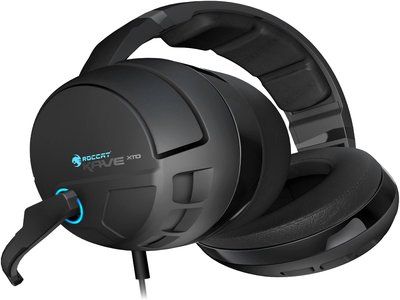 Between middling sound quality and an overwrought setup, the Roccat Kave XTD is not a good investment.

If you're not sure exactly which features consumers will want in your product, you can always take the kitchen-sink approach and just give them everything. Such is the philosophy behind the Roccat Kave XTD ($170), which is chock full of options, but far too expensive for what it does. The Kave XTD is a perfectly functional device, but between middling sound quality and an overwrought setup, it's not a good investment unless you need a few of its unusual but useful sound card features.

First things first: The Kave XTD is enormous. At 13.4 x 5.3 x 10 inches and 13.8 ounces, it's one of the largest headsets I've encountered. The problem is that I'm not sure the size counts for much. Unless you have a truly massive head, you won't need to extend the adjustable headband all the way, and there's only a moderate amount of padding near the top.

The earcups are also huge and well-padded, but the size seems mostly for show. They fit tightly around the ears, and don't swivel like competitors from Logitech and Corsair do. There's also a detachable, pivoting microphone on the left ear. It doesn't really get in the way, but you can remove it if you so choose.

The pièce de résistance on the Kave XTD is its external 5.1 sound card. Rather than plugging directly into a USB port, the Kave XTD routes through an external sound card with its own control panel. From this huge apparatus, you can control volume as well as the balance for the front, center, rear and woofer aspects of your computer's sound.

The sound card can also mute the microphone, optimize the headset for games or Skype calls, route the sound to external speakers or hook up to your phone via Bluetooth to take calls. On paper, this all sounds very impressive, but in practice, it adds a very bulky device that clutters up your desktop. You can accomplish most of what the sound card does just as easily by using the Roccat software.

If you guessed that a headset as bulky as the Kave XTD would be uncomfortable, you guessed correctly. Not only did it weigh heavy on my head, like King Henry IV's crown, but also the earcups felt incredibly tight, and did not conform to my head very well. While the headset was never painful, I was eager to get back to my regular headphones — or nothing at all.

A co-worker told me that while he also found the earcups tight, he didn't find it too uncomfortable overall. In particular, he liked how big the earcups were. Like most headsets, individual comfort on the Kave XTD seems tied to head size, glasses, hair and a number of other factors.

The Kave XTD sounds good in-game. If you want to hear what's going on around you without too much muss or fuss, the Kave XTD will have you covered, but all the fancy sound cards in the world can't disguise the fact that the headset is a middle-of-the-road peripheral.

I tested the Kave XTD with Titanfall and Assassin's Creed Unity, and have nothing exciting to report about either game. With the 5.1 surround sound turned on, I heard the futuristic battle sounds of Titanfall and the early modern sword fights and pickpocket chases of Assassin's Creed Unity, and I was able to discern the sound's direction pretty well.

Likewise, when I tested the microphone with a co-worker, he received my voice loud and clear, but there was nothing else to report. You can alter your voice with a few different preset options, but none of them bowled us over. (Incidentally, the "woman" option did not actually make me sound like a woman, so would-be scammers, be ye fairly warned.) Taking phone calls via Bluetooth during gameplay worked as advertised, but the sound quality wasn't great, and I had to turn the volume way up to hear what my co-worker was saying.

You can do a lot with the Kave XTD software, which makes the few things you can't do all the more confusing. The Kave XTD Sound Console lets users adjust volume levels, mic settings, equalizers and surround sound with a great deal of nuance. Dynamic bass, brilliant audio (which upscales low-res files), voice clarity, noise suppression and sampling rate for both incoming and outgoing sounds are present and accounted for. An experienced audiophile could have a lot of fun with this program.

Better still: the Kave XTD Sound Console lets users program and apply up to five different profiles. Given that the program's presets include optimizations for first-person shooter, massively multiplayer online and action/adventure games, it's easy to see how creating a few different profiles could be a real boon. Switching between three different game presets as well as movie and productivity settings is easy.

However, this process could be even easier, since it's not possible to link these profiles to individual games or programs. Furthermore, the Kave XTD Sound Console does not link with other Roccat products.

The way music sounds on the Kave XTD should give audiophiles pause before picking one up. No matter how much I toyed with the headset's equalization options, I couldn't get any song to sound more than just plain. The bass is almost nonexistent, even on settings that favor it, and activating dynamic bass makes the treble sound very distant.

The best word for the soundscape is "confused." It doesn't seem to favor any particular type of sound, making music sound a little jumbled. It's neither muddy nor clear, neither bright nor dark; it just is. With enough equalizer tweaking, you could probably get your favorite band to sound the way you want it, but then you'd have to repeat the process as soon as you queued up another album.

I tried the device with selections from G.F. Handel, Old Crow Medicine Show and Flogging Molly, and none of the songs sounded particularly impressive. As a gaming peripheral, the Kave XTD is passable, but you'll probably want to swap it out for a regular set of headphones otherwise.

With a high price tag, a bunch of unnecessary features and slightly substandard core performance, the Kave XTD comes with too many caveats for a recommendation. It's a clear case of overdesign trumping utility. For much less money, you could get a capable wireless headset like the Corsair H2100 ($100); for much, much less money, you could get a simpler device with similar sound quality like the Logitech G430 ($60).

Roccat has promised exciting things ahead for the rest of 2015. For the moment, it's probably best to wait and see exactly what the company will offer.