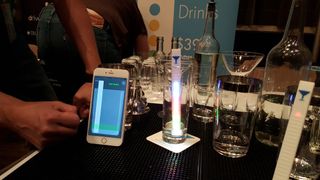 BERLIN – Ask any mixologist, and he or she will tell you that mixing the perfect drink takes a lot of skill, a lot of practice and a little bit of luck. If you lack the patience for that approach, though, you could always try the MixStik. This quirky little gadget connects to your smartphone and shows you how to mix cocktails on the fly, complete with a colorful sensor to let you measure out ingredients in real-time.

I first encountered the MixStik at IFA 2015, and as a former bartender, I had to stop and take a look. The technology was intriguing, especially for those who don't have a good handle on how to construct a cocktail.

The MixStik itself is a rechargeable white rod that displays different LED colors, depending on the drink in question. Using a smartphone app (iOS or Android), you select a drink, like a Long Island Iced Tea or a Margarita. The stick will then glow different colors at different increments. You pour an ingredient until you hit the meniscus of the first ingredient, then switch to the next. For example, the lowest level of a margarita might glow green for sour mix. You would pour until you hit the top of the green markers, then switch to tequila until you hit the top of the yellow markers.

The developers behind MixStik appear to have thought of everything, as the app even takes temperature into account. The Stik itself can withstand extremely hot and extremely cold temperatures, so whether you want to make a piña colada or a hot toddy, the MixStik can help. For cold drinks, the app will instruct you to add all the ingredients first, then display white markers for adding ice.

At first, the MixStik app will come preprogrammed with about 100 drinks. After that, it will be up to the community to add their favorites. Users can share their favorite recipes freely and program their own color combinations into the device. Over time, bold new drinks may rise in popularity while disgusting ones sink into ignominious obscurity.

There is, however, one catch to the MixStik: at present, its release is not a sure thing. The company will soon launch a Kickstarter campaign to fund the device, and it will cost about $40 to back the concept and get a device in return. The release date is, of course, still very far in the future.

While MixStik won't offer much to experienced bartenders, it could be a great way for neophyte drinkers to learn the ropes. This is one electronic gadget that seems perfectly safe to operate under the influence of alcohol.