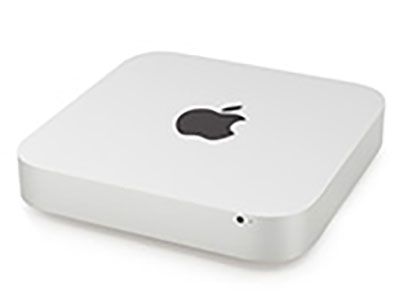 The Mac mini (late 2014 edition) is an affordable and attractive OS X machine, though it sacrifices the upgradability of previous models.

The Mac mini (starting at $499) is the smallest and most affordable member of Apple's Mac family, and has the potential to be the most versatile. Its svelte design makes an attractive addition to your workspace, and unlike with a MacBook or an iMac, you get to decide exactly which monitor and peripherals to use with it. The latest version of Apple's mini PC has faster processors and useful new ports, though its lack of swappable components means that you won't get to upgrade it over time.

Editor's Note: Apple has announced a new Mac mini, which will be shipping November 7th, 2018. Read our write up of the announcement for all the details.

Like its predecessors, the latest Mac mini packs the complete OS X experience into a sleek, square package. The mini PC's all-aluminum, curved-edge construction exudes Apple's knack for minimalism, with nothing but a power indicator and an Apple logo visible from the front.

Unlike the 2012 version, the new Mac mini's black, circular bottom panel can't be easily twisted off, and you can no longer swap out the RAM or storage. You'll now have to pry open the panel with a tool (we used a screwdriver), and the only removable component is the PC's Wi-Fi module.

On the back of the Mac mini, you'll find an HDMI port, four USB 3.0 connections, an SDXC card slot, and audio-in and headphone jacks. New to the Mac mini are its two Thunderbolt 2 ports, which allow for extra-fast data transfers and are ideal for connecting to 4K monitors.

The Mac mini touts 802.11ac Wi-Fi support for getting online, as well as Bluetooth 4.0 for connecting to your wireless gadgets. The PC also packs an Ethernet port for wired Internet, which you won't find on any current MacBook.

The Mac mini's port selection includes everything you'd expect from a modern PC, and the Thunderbolt 2 connections add some welcome productivity options. However, while its rear-facing ports help maintain the sleek computer's seamless design, they sacrifice some convenience; I would have preferred to have access to a headphone slot and at least one USB port in the front.

Packing a 4th-generation, 1.4-GHz Intel Core i5 processor and 4GB of RAM, our Mac mini handled basic entertainment and productivity tasks with ease. When playing around in GarageBand while simultaneously streaming HD video from Netflix and YouTube, I didn't experience a hint of slowdown.

Our Mac mini's 500GB, 5,400-rpm hard drive copied 4.97GB of mixed media in 2 minutes and 28 seconds, resulting in a file-transfer rate of 34.4 MBps. While this rate is comparable to that scored by the iMac's identical hard drive (38.5 MBps), the Mac mini performed about half as quickly as the 69 MBps all-in-one desktop average. The mini couldn't come close the NUC's PCIe x4 SSD or the ThinkCentre's 500GB, 7,200-rpm hard drive, which registered a blazing 309 and 138 MBps, respectively.

With its integrated Intel HD Graphics 5000, our starting configuration of the Mac mini is far from a graphical powerhouse, but it can still handle a few non-demanding games.

The mini PC ran World of Warcraft at a playable 30 frames per second at 1080p with autodetect on, but stumbled when the settings were turned up. The NUC notched only 26 fps under the same settings, and both PCs fell to the high teens with the graphics kicked to ultra.

The Mac mini registered 22.97 fps on the OpenGL portion of the Cinebench benchmark, which tests a machine's GPU. Apple's computer fell behind the Intel HD 6000-powered NUC (33.57 fps), and mustered less than half of our 54-fps average for all-in-one desktops.

The Mac mini ships with Apple's OS X Yosemite, which adds some useful new tweaks to Apple's operating system while allowing your Mac to work seamlessly with your iOS devices.

As long as your Mac and iPhone or iPad are connected to the same Wi-Fi network (and are logged in to the same iCloud account), you can answer calls and texts from the desktop without reaching for your phone. With the new Handoff feature, you can start composing a text, email or document on your iOS device and finish it on your Mac (or vice versa) with a single click.

The Handoff feature worked seamlessly in my testing — whenever I started composing a note or message on my iPhone, I immediately saw a prompt on my OS X dock to transfer it to a Mac. I was able to pull up a website on one device and transfer it to the other, and was able to receive and answer my iPhone's calls right from the Mac dashboard.

Yosemite introduces a flatter, cleaner, iOS 8-esque aesthetic, with revamped versions at Notification Center, Calendar and Safari that closely mimic their mobile counterparts. If you happen to be using the Mac mini somewhere without Wi-Fi, you can use Yosemite's Instant Hotspot feature to get connected via your iPhone.

Packing standard-issue Mac apps such as GarageBand, iMovie, Pages, Keynotes and Numbers, the Mac mini offers plenty of built-in options for creative professionals and business users. You can expand your app collection via the Mac App Store, which features popular apps and games such as Kindle, Logic Pro X, BioShock Infinite and Batman: Arkham City.

The Mac mini ships without a keyboard, mouse or monitor, so you'll have to use your own peripherals or buy new ones.

Value: Which Mac Is for You?

The Mac mini is the cheapest of Apple's desktops, but each of Apple's home computers has its own advantages. If you want similar specs and don't want to fetch your own monitor and accessories, the $999 iMac provides a complete OS X experience out of the box. However, because the iMac is tied to its monitor, you won't be able to throw it in your bag or easily hook it up to your TV as you can with the Mini.

While the Mac mini and iMac are for everyday consumers, the Mac Pro is built for power users. You'll have to shell out $3,000 to get your hands on one (no monitor or accessories included), but you'll be getting a beefy quad-core Xeon E5 processor, 12GB of RAM and dual AMD FirePro D300 GPUs in return.

The 2014 Mac mini (starting at $499) is an attractive, affordable and efficient OS X machine. The PC's Thunderbolt 2 ports and Intel Iris Pro graphics support will come in handy for creative professionals and power users, while the machine's 4th-gen Intel Core i5 processor provides more than enough power for Web surfing and entertainment. And though it's not the most miniature mini PC around, the Mac mini still looks slick on your desk or next to your TV.

You can no longer swap out the Mac mini's RAM and storage, which could make the PC less useful over time as you run out of storage or run apps that max out your memory. Mac fans should also consider the $999 iMac, which offers comparable performance with an included display, mouse and keyboard. Still, as a low-cost, hassle-free OS X machine that works with your choice of peripherals, the Mac mini delivers.