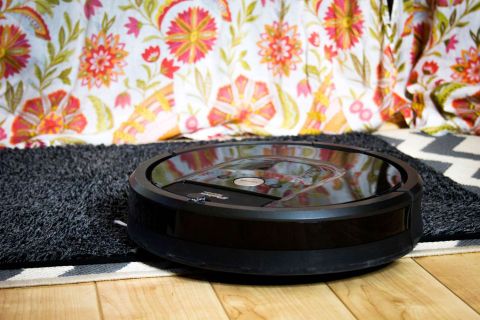 The Roomba 980 is a dutiful helper around the house, but its trouble with pet hair and its high price should convince you to look elsewhere.

The name Roomba may be synonymous with robot vacuums, but that doesn't mean every model is the cream of the crop. That's not the say that the Roomba 980 isn't a dutiful vacuum. Like its predecessors, this device is a meticulous little helper that keeps the house spot-free, and the companion app works well.

But when you factor in its high cost — about $890 on Amazon — and that it doesn't clean any better than the competition, you might want to go with another brand instead.

If you've seen one Roomba, you've seen them all. Like the rest of the Roomba family, the Roomba 980 is a circular device with black trimmings and a near-futuristic look. However, its round shape meant the vacuum couldn't reach into corners as effectively as the D-shaped Samsung Powerbot R7070 or Neato Botvac Connected.

The Roomba 980 is 13.9-inches across in diameter and 3.6-inches high, making it short enough to clean under my sofa, but too tall to get under my bed. By comparison, our top two vacuums, the Powerbot R7070 and Neato Botvac, were 3.8 and 3.9 inches tall, respectively.

At 8.7 pounds, the Roomba 980 was sufficiently light that I could cart it up and down a flight of stairs, and it even features a built-in carrying handle.

The Roomba 980 offers three buttons on its chassis: a Home button on the left, a Clean button in the middle and a Spot Clean button on the right, which can be used to preserve power and clean only where there's mess. You don't have to start the job from the Roomba itself, however, as there's a companion app you can use on iOS and Android to manually operate the robot and schedule when it cleans.

It's not very easy to empty. I had to don a pair of gloves to grab the giant dust balls and dispose of them myself.

You can tell which mode the Roomba 980 is in by checking its indicator lights, which appear above the Clean button. The familiar Wi-Fi logo will light up to indicate the Roomba's connection status, while a troubleshooting symbol will pop up if something's gone awry; the Roomba will then sound off an error number, which is easily Google-able. The battery indicator is pretty straightforward, too, and it'll pulse yellow if charging is needed, or display green when things are ready to go. There's also a red trash icon to denote when the dustbin full.

It's not very easy to empty, though, and I found the hole too small for to dump the mess out without assistance. I had to don a pair of gloves to grab the giant dust balls and dispose of them myself.

On the bottom, the Roomba 980 features a floor-tracking sensor, two 6.2-inch rotating brushes and a spinning side brush to capture peripheral debris. By comparison, the Samsung R7070 and Neato Botvac offer 11.2- and 11.4-inch brushes, respectively, so the 980's suction area is a bit smaller than the competition's.

One neat trait of the Roomba 980 is that it utilizes VSLAM, an algorithm that helps the robot simultaneously map and track. On top of the 980, there's a small notch that contains a camera pointed forward and up. To create the map, the 980 snaps a picture of its locale, and then the algorithm determines its path based on the area it's mapped out and the objects placed around it.

The Roomba 980 is a quick cleaner but was less thorough than either the Samsung Powerbot R7070 or the Neato Botvac Connected.

The robot will then track those objects as it moves, but it will also continue to take pictures and actively scan them for the best route. There's also a sensor on the bottom of the device that helps collect floor data.

Performance: Not the best for picking up pet hair

Part of the appeal of the Roomba is that it has an innate tendency to act a bit like a person. For instance, when you press the Clean button, the robot vacuum will sing a jingle in a sort of R2-D2 fashion, as if it's waking up from a long nap. Press the button again to start the job, and it's like you have your own, personal cleaning butler.

The Roomba 980 is a quick cleaner, but was less thorough than either the Samsung Powerbot R7070 or the Neato Botvac Connected. While all three picked up nearly 100 percent of Cheerios on both wood and carpet, the Roomba picked up only 82 percent of sawdust sprinkled on a vinyl surface, compared to 100 percent for both the Samsung and the Neato.

The Roomba fared even worse when cleaning pet hair. On vinyl, the vacuum sucked up just 46 percent of fur, while the Neato and Samsung both got all hairs. Repeating the test on a wood surface, the Roomba improved by 20 percent, but was still well behind the other two.

On carpet, the Roomba 980 left behind 58 percent of pet hair even after vacuuming over it for 18 minutes, whereas the Samsung and Neato left just 25 percent. Even on flatter floors, the 980 left behind a significant trace of fur. The exhaust vent on the device also caused the pet hair to fly up and out rather than into the dustbin.

The Roomba 980 is good at navigating around walls and furniture legs, and even around stray cables and lost shoes. It never once tossed itself down the stairs, even when it reached the edge, nor did it get caught on my woven rugs. Like its predecessors, the Roomba 980 comes with two "virtual walls," each of which requires two AA batteries. They can be set up as a partition of sorts around your space, either at the door or around a sensitive area.

One of the 980's biggest follies is how loud it is. Though it tested at only 70 decibels at our lab, this little robot makes vacuum sounds as loud as those of an upright. It was almost deafening when rolling through the part of my house where I have higher ceilings. The Neato Botvac and Samsung R7070 both registered higher decibels (72 and 71, respectively), but I didn't feel like moving to another part of the house while they were cleaning.

MORE: The Best Robot Vacuums to Clean Your Pad

The Roomba 980's second major flaw is that it doesn't clean well around corners or edges, because of its circular shape, regardless of whether you enable the Edge cleaning mode inside the iRobot app. Its competition, the Botvac and R7070, are more adept at this because of their D-shape designs. Perhaps it's time iRobot considers straying from the shape it helped popularize and modernizing its abilities.

Whether it's spot cleaning or performing a sweep of the house, the Roomba 980 smoothly routes itself back to its base station and parks itself to charge up before the next cleaning. iRobot has advertised up to 2 hours of cleaning power, and our lab test results didn't stray too far from that mark. The robot managed an hour and 22 minutes on a 470-square-foot area.

The nice thing about the Roomba 980 is that there are more functions to unlock once you install its companion mobile app. The iRobot app features a navigable interface with distinct menu options, including a giant Clean button in the middle of the screen. If the dustbin is full, you'll see a giant red marker.

Additional options let you choose your cleaning preferences, schedule the Roomba, see its cleaning history and figure out when it's time for actual bot maintenance, including cleaning out the debris extractors. The iRobot app offers other helpful feedback, too, like maps of where it's cleaned once it's finished a session.

Setting the Roomba 980 up to work with the Google Home or Amazon Echo is also supremely easy, and there's even a walk-through on iRobot's site.

The Roomba 980 is manufactured by the original robot vacuum purveyors, but more competition has cropped up in this space since Roomba debuted. This vacuum has plenty of tread to make it over the uneven parts of your house, suction that can suck up all the cat litter strewn about, and an app that is easy to use and intuitive enough that your even your technophobic relative could program this thing.

However, for $900, this vacuum performed poorly when picking up pet hair, especially compared to competitors, such as the Samsung Powerbot R7070, which costs $300 less and is our pick for the best high-end robot vacuum. If you're going to drop nearly a thousand dollars on a robot vacuum, make sure that it picks up what's ailing you. The iRobot Roomba 980 simply might not.