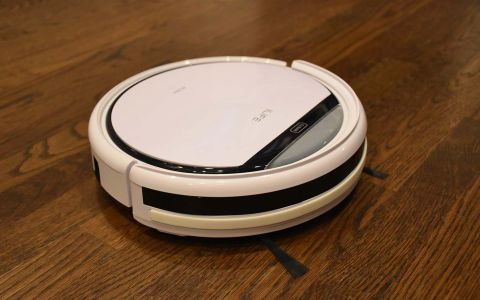 How much vacuum cleaner do you really need? The iLife V3s Pro robot vacuum cleaner knows what it does well and sticks to it – namely, pet hair. While it lacks fancier features such as smartphone control, the $160 V3s Pro is a great deal for multi-pet households looking to spend less on cleaning and more on chew toys. If your home has thick rugs, then you’ll want to look elsewhere, but if your flooring is primarily hardwood or tile with a few thin rugs, this is the best robot vacuum for less than $200.

The iLife V3s Pro looks remarkably similar to its sibling, the V5s Pro, though it swaps out the gold plastic cover for a white one with white and black bumpers around the sides. At 3 inches high, the slightly raised lip on the front of the vac keeps the V3s Pro from venturing to locations where it might get stuck. Two, three-spoke brushes that spin when the vacuum is running sit on either side, near the front of the device, loosening debris and guiding it toward the robot’s gullet. As with other iLife robot vacuums, the V3s Pro lacks a spinning roller brush, opting for a 3-inch suction opening that funnels debris directly into the dustbin. The lunchbox-like dustbin, complete with a bright yellow handle, sits in the center of the vac, beneath the white cover.

While the absence of a roller brush certainly makes cleaning and maintaining the bot much easier, we did notice that the V3s Pro struggled to pick up larger debris on a low-pile carpet. Robot vacuums equipped with a roller brush, such as the Shark Ion R85 — our favorite overall robot vac — did a better job.

Like other non-connected robot vacuums, the iLife V3s Pro is a snap to set up. Just like the V5s Pro, all we had to do was plug in the base, flip the power switch, and charge it. We appreciate that the power adapter works with both the base and the robot itself;it’s a nice little piece of insurance in case the family dog absconds with the small plastic base.

The iLife V3s Pro has three cleaning modes – whole floor, edge and spot cleaning, which sends the vacuum slowly spinning into a spiral as it focuses on one area.

Though the iLife V3s Pro is a budget vacuum, its cleaning prowess on our hardwood floors blew us away. The machine picked up small, flaky pieces of onion skin as it carefully wound itself around our baseboards in edge-cleaning mode. Like its V5s Pro sibling, it approached walls and obstacles slowly and gingerly. Though it’s not always perfect, the slow obstacle approach reminded us of more premium vacuums, like the iRobot Roomba i7.

The V3s Pro vacuumed up a thick line of breadcrumbs we sprinkled horizontally into its path without a second thought. After the vac made a few passes, the breadcrumbs were gone. By comparison, the iLife V5s Pro spread the crumbs around and never quite managed to capture all of them, leaving a gritty surface on our hardwood floor.

In our lab tests, the iLife V3s Pro was a top performer. The robot earned a perfect score on our pet hair on the hardwood test, picking up 100%. Out of all of the robot vacuums we tested – in all price ranges – the V3s Pro was the only one that achieved perfection on this test. The robo vac was equally impressive on carpet when dealing with pet hair, picking up 99% of it, just a hair (pardon the pun) less than the iLife V5s Pro’s 99.5% pickup rate. The device's performance was remarkably better than the Eufy RoboVac 11s, which only cleaned up 75% of pet hair on carpet.

Overall, the iLife V3s Pro was nearly perfect on our hardwood floor tests, picking up an average 99.8% of the Cheerios, kitty litter and pet hair we threw at it. That score is the single best hardwood test result average of any robot vacuum we tested. On carpet, the V3s Pro faltered slightly, cleaning up an average of 94.2% of the debris. However, the Shark Ion R85 was the only vacuum to best it, with it’s 97.2% carpet-cleaning average.

The iLife V3s Pro completed its lab-test cleaning runs in an average of 1 hour, 31 minutes and 1 second. This speedy bot is more than 9 minutes minutes faster than the iLife V5s Pro, but lagged behind the Eufy RoboVac 11's average cleaning time of 1 hour, 18 minutes, as well as that of the Shark Ion R85 (1:01). The device was also a full 40 minutes slower than the robot vacuum average of 1 hour and 50 seconds.

While the iLife V3s Pro is an impressive cleaner, the logic behind its movements didn’t always make sense to us. The machine was particularly enamored of repeatedly cleaning our foyer and under our couch. Even when we coaxed it into our kitchen to clean instead, the vac made one pass and then returned to the foyer. Likewise, when we used the remote control to send the robot back to its dock, it wandered around for awhile, eventually getting itself stuck in a pattern under the couch. Thankfully, we were able to use the arrow controls on the remote to retrieve it.

The noise level of the iLife V3s Pro at 64.1 decibels in our lab, which is slightly louder than both the 62.5 decibels generated by the Eufy RoboVac 11s and the comparatively quiet 59.9-decibel iLife V5s Pro. We noticed it, too. It was hard to hear the scheming and dealing on “Billions” over the din of the vac.