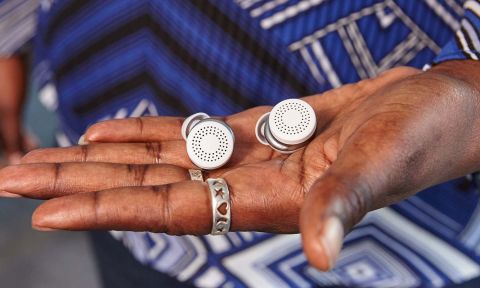 The Here One smart wireless earbuds are for early adopters eager to experience the future of augmented listening. Everyone else should wait for a pair with longer battery life.

Don't call them earbuds. The Here One ($299) is so much more. These wearables are actually a pair of computers with a set of microphones that can potentially change how we listen and what we hear. Paired with the app, these earphones offer a form of augmented hearing that essentially layers ambient sound over whatever you happened to be listening to at the moment, creating a merged audio experience. Want a more secluded listening experience? Just hit a button, and enjoy your tunes minus a noisy cubicle mate or street traffic.

As fun and intriguing as the aural concept is, though, packing a computer into something as small as an earbud does entail some sacrifice, the biggest of which is extremely short battery life. Still, the Here One is like a piece of the near future for a modern-day audience.

This is what the future looks like: not a pair of earbuds with the cords lopped off (as on the Apple AirPods) but a device that tastefully combines form and function. The outer shell of the Here One buds is done in a matte white that's accentuated by a pearlescent silver stripe in the center. The part of the earphones that reside in your ear is made from a matte gray plastic with five embedded metal connectors for charging. A small “L” (left) and “R” (right) etched into each respective bud eliminates any confusion when it's time to put them in your ears.

Instead of dangling from my ears like a techy take on the hair-gel gag from There’s Something About Mary, the Here One buds protrude ever so slightly from my ears. In short, they're interesting enough to be a conversation starter without being outlandish.

When I'm not using the earphones, they reside in their case, which is constructed of the same unassuming gray matte plastic seen on the buds. The part where the earbuds are housed is made of white matte plastic and features four status light indicators for tracking charging progress.

As cool as the Here One buds look, the magic doesn't truly happen until you launch the app. After I paired the buds with the app, it was time for some fun. The free Here One app gives the listener a form of augmented or layered hearing, through its six noise filters (Airplane, City, Crowd, Noise Mask, Office and Restaurant).

That meant that as I sat at my desk, listening to Floetry's "Sunshine," I held a conversation with a few of my colleagues while using the Restaurant filter. The integrated microphones in each bud focused on the conversation in front of me, layering it over my music and allowing me to hum along and hold a conversation.

On my way to the subway after work, I switched to the City setting, which let in the ambient noise of my surroundings, including honking horns and errant conversations. But as fun as listening in on conversations surreptitiously can be, my favorite filters were the ones that let me shut out the world.

Noise Mask, for example, pumps in white noise to bring the world down to a dull roar. But I ultimately found myself using the Office setting the most. It didn't pump in a bunch of artificial noise like Noise Mask did, but it still quieted the world around me so I could enjoy my jams without the intrusion of subway announcements, panhandlers and unruly teens.

In a sound-off with the Apple AirPods, I found that the Here One offered much more detail. For instance, I could hear all of the strings as I listened to Blackstreet's "Joy," but those details seemed to meld into the rest of the instrumentals on the AirPods. However, the AirPods also delivered an overall fuller and warmer sound.

When I switched over to Alanis Morissette's "Ironic," there was enough separation that I heard nearly every strum of the guitar as well as the snares. However, the highs on the Here One were overly bright and brittle compared with the more balanced presentation of the AirPods.

Unlike when I’ve worn other of the truly wireless earbuds, I've never felt worried about one of these buds popping out of my ears to somewhere out of reach. A simple twist backward into place snugly secured the Here One buds into my ear canals. They even stayed put when I tried to run for the M7 bus.

In terms of comfort, I prefer the Here One to both the AirPods and the Bragi The Headphone. Once the Here One buds were in place, I sometimes forgot I was wearing them — well, other than when the music reminded me. Although the Here One fit me right out of the box, Doppler Labs also includes several pairs of ear tips in both silicone and foam.

MORE: 12 Cheap Earbuds (Under $20) Ranked from Best to Worst

As fun as it is to switch between audio filters and create my own, doing so soon took a toll on the Here One's battery. The earbuds lasted 1 hour and 35 minutes before a friendly female voice let me know that the end was near; about 10 minutes later, the buds shut down. That's 15 minutes short of the 2 hours that Doppler Labs claims the headphones should get.

If your earphones conk out in the midst of your travels, the carrying case can charge the Here One up to three times before it needs to be recharged. That's fine, but that meant I was left at the mercy of the NYC subway system and its cacophony before I could get to charge the buds.

During my travels, I noticed that the Bluetooth connection between the phone and the Here One would drop out unexpectedly. This happened even though the phone was in my hands and well within range of the buds. Even more puzzling was that the music continued to play. However, I couldn't access any of the audio filters in the app, so I had to restart the app and re-pair the buds. With all the fancy tech crammed inside the Here One, I wouldn’t have expected that to happen.

What a difference a filter makes. Whether I was in a crowded restaurant or walking down a particularly windy street, I never heard any complaints when fielding calls from friends and family. During one such call with my mom, she thought I was in the office when I was actually in a semi-crowded coffee shop, getting some hot chocolate. Although I would hear a faint echo every now and then on my end of the call, my callers' voices were clear and conversationally loud.

MORE: Buying Headphones in: Pros and Cons of Every Type

The future of audio lies in augmented listening — but it’s not quite here yet. For $299, Doppler Labs has given listeners the power to control how and what they hear. It's pretty heady stuff when you get right down to it. However, less than 2 hours of battery life on wireless buds is no good, no matter how cool your new bionic ears are.

Though they don't offer cool audio filters, the Apple AirPods get 5 hours of battery life, as well as warm, albeit sometimes muddy, audio quality. Still, if you’re an early adopter and want to live on the bleeding edge of tech, the Hero One earbuds might be worth the splurge.