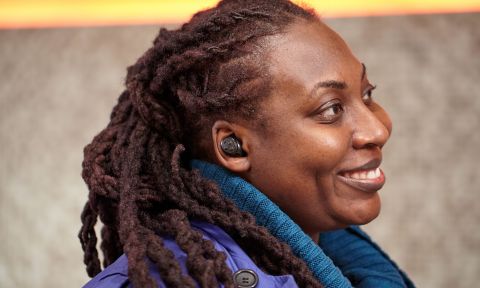 Bragi's The Headphone delivers good audio with nearly 6 hours of battery life in a pair of lightweight wireless earphones.

Bragi's getting straight to the point with its second go-round in the wireless earphone space. Simply called The Headphone, the $149 earbuds ditch all the bells and whistles of Bragi's teched-out predecessor in favor of longer battery life, steady connectivity and easy usage. The result is one of the better truly wireless earphones on the market, which will be more than enough for music lovers looking to cut the cord.

These aren't the flashiest earbuds I've ever seen, and that's OK. As a device that nestles into the hollow of your ear, it's supposed to be a little nondescript. That's not to say the earphones are ugly. The majority of the buds are encased in shiny black plastic with the face capped off by a matte, textured finish.

The face of the right bud has three raised buttons (X, O and a Triangle), which are used to control power, volume and track changes, while the left bud is emblazoned with a B. The bottom edge of each earphone lights up quickly to signal charging or pairing.

The Headphone's cylindrical charger/carrying case is made from matte black plastic. A fabric lanyard is attached to a small metal rod in the bottom in case you want to wear it around your neck. If there's one big difference between The Headphone and Apple's dangly white AirPods, it's that I didn't feel self-conscious wearing Bragi’s earphones. Nestled subtly into my ears, no one knew I was wearing them unless I took a phone call. Then, I just looked like I was talking to myself, but at least I didn't look like an outtake from There's Something About Mary.

Due to my rather small ears, I typically shy away from in-ear cans, so The Headphone took a bit of getting used to. The default medium-size silicone FitTips had an OK fit, but as they expanded to anchor themselves in my ears, they sometimes grazed those fine ear hairs, causing me to take them out to scratch the resulting itch. I found a more comfortable fit with the Comply foam ear tips, which also delivered a tighter, more secure seal that helped keep out ambient noise. All it takes to place The Headphone in your ear is a simple upward twist.

No matter which ear tip I used, I never felt like the earphones were in danger of falling out. As I barreled down the stairs to the subway, I didn't give them a second thought. My biggest pain point came when it was time to adjust the volume or skip tracks. Using buttons in lieu of a swipe or tap-friendly surface means that you have to press on the right earbud rather hard to get a reaction. That often pushed the ear tip farther into my ear canal at an uncomfortable angle.

Prepping The Headphones for a jam session is fairly simple. Press the power button to turn the earphones on. Once activated, the earphones instantly pair with each other using Near Field Magnetic Induction technology (NFMI). From there, you simply press and hold the power button to initiate pairing mode, following the instructions on your smartphone, laptop or tablet to complete the process.

After The Headphone is paired to your device, the power button pulls triple duty answering/ignoring calls, skipping tracks and playing/pausing music as well as powering the earphones on and off. The volume buttons also have extraneous uses as pressing the up volume for a second enables an audio transparency mode, which allows ambient noise into the otherwise passive noise-isolated soundscape. Pressing the down-volume button disables the feature.

Even though they aren't audiophile-grade earphones, The Headphone still gave me a good time listening to some of my favorite jams, albeit with a few hiccups. The roar of the electric guitar and tinkling of the piano keys were front and center on EnVogue's "Don't Let Go (Love)." However, the quartet's usually rousing vocals sounded a bit muffled on The Headphone, compared with the AirPods.

The Headphone delivered clearer, deeper bass on Jay Z's "1-900-Hustler," where the AirPods consistently delivered boomy lows that hid some of the finer details of the track. That rich bass and relatively clear highs carried over to songs like Rihanna's "Work," Janelle Monae's "Can't Live Without Your Love" and Queen and David Bowie's "Under Pressure."

Thanks to the foam Comply tips, The Headphone delivered a tighter seal than the AirPods, which allowed for ambient-noise-free listening. That is, unless I wanted to hear that nearby argument on the subway by activating The Headphone's Audio Transparency mode, so I could be nosy while listening to Anderson Paak.

Bragi claims The Headphone will last 6 hours on a charge and so far, the earphones live up to that claim. During a flight to Las Vegas, The Headphone tapped out after 5 hours and 31 minutes into the trip. It's a good thing that there was an available outlet on my connecting flight, as The Headphone's charging/carrying case can't charge the earphones without first being plugged in.

It's a surprising omission since the Apple AirPods' case can charge on the go. Bragi's Dash headphones also have this feature in their carrying case.

Barring a wall impeding the signal or walking through the signal garden of a convention center, you should expect the typical Bluetooth range of 33 feet. Any farther, and the signal starts to cut out. I was impressed with The Headphone's tenacity on the CES show floor. Despite scads of companies running competing Wi-Fi and Bluetooth products, the Bragi's signal cut out only a handful of times over a five-day period, and signal drops lasted only a second or two.

The Headphone can make and accept calls rather well. Despite pushing my way through the crowds at CES, my boyfriend reported that he could hear me loud and clear. His voice was clear on my end of the call, but the volume dropped out at times, similar to when I was listening to music.

Up until now, wireless earbuds have promised much, but delivered little in the way of connectivity, audio performance and battery life. But that's starting to change thanks to Bragi. The Headphone offers a minimalist approach to the wireless earbud market, creating something that's unobtrusive and relatively easy to use with longer battery life than the current crop of competition.

However, for a mere $10 more, you can get the Apple Airpods ($159), which deliver about 5 hours of battery life, a portable charging case and near instantaneous pairing (if you own an iOS device). The bass can be a bit overwhelming on Apple's headphones, though, which can muddy up the rest of the track. Overall, if you're looking for some good-sounding, relatively comfortable wireless earphones with impressive battery life, Bragi's The Headphone should be at the top of your list.