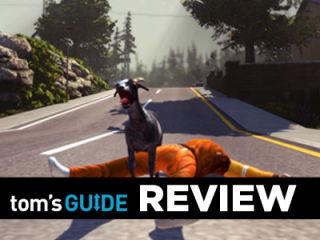 For almost 50 years, gamers have searched for the elusive Holy Grail of the medium. Gaming's history has been a long and inspiring narrative, absolutely littered with quality titles, but they pale in comparison to "Goat Simulator," the latest effort from Coffee Stain Studios.

Compared to "Goat Simulator," gaming's greatest achievements seem crude and tawdry. "Spacewar," "Super Mario Bros." and "Mass Effect" suddenly appear as nothing but gentle rolling hills on the path to this title's towering peaks. Every other development studio may as well beat its computers into ploughshares because the video game, as an art form, has finally attained perfection.

What is "Goat Simulator"? One may as well ask, "What is the totality of existence?" or "Which 'Simpsons' quote is the most memorable?" They're questions mere mortals were not meant to answer.

Still, in simple terms, "Goat Simulator" is something akin to a skateboarding game. You'll take control of the eponymous goat, who must wander a small Swedish town and wreak as much havoc as humanly — or goatly — possible. Like every town in Sweden, the one in "Goat Simulator" comes complete with roads, houses, swimming pools, backwoods racetracks, anti-gravity laboratories and portals to the underworld.

The environment is your plaything. Launch yourself into the air and perform flips, or baa to your heart's content. Head-butt or kick cars to see them instantaneously explode (complete with a "Michael Bay" achievement), but gaze in awe as the same attack has no effect whatsoever on a flimsy tin fence. Climb stairs and ladders as your head gets stuck in level geometry as your tongue flails wildly.

Whereas lesser games would concern themselves with trifles such as level progressions or difficulty curves, "Goat Simulator" simply gives you objectives and lets you figure out how to accomplish them. If an objective instructs you to get six seconds of airtime, you'd better figure out how to float, because the game is not going to tell you. "Dark Souls II" has nothing on "Goat Simulator."

Sure, you can accomplish every objective in the game in the space of a few hours, but "Goat Simulator" is a game that emphasizes quality over quantity at every turn. For example, clicking Reset Default Controls in most games would simply reset the default controls. In "Goat Simulator," not only does the game crash irreparably, but it gives you an achievement. Few other titles are so thoughtful.

Whether you're hurling yourself off cranes, getting run over by trucks, blowing up propane tanks with the slightest tap or breaking into the Coffee Stain Studios office to play a brisk round of "Flappy Goat," "Goat Simulator" is simply the most engaging, compelling and immersive product to exist, in any medium, ever, of all time.

Only a philistine of the highest order could fail to be moved by the masterful narrative of "Goat Simulator." Although an uneducated mind might accuse the title of having no story whatsoever, it reveals itself in bits and pieces to those who look beneath the game's placid, quotidian surface.

By hunting down every bit of lore, the dedicated player can unearth a Dadaist metanarrative about how one simple goat's lust for gold and thrill seeking leads him down an irredeemable path to immorality, destruction and, ultimately, hell itself.

As the goat takes his seat upon Lucifer's dark throne, the player realizes the grim truth: The goat is each and every one of us. This seemingly benign barnyard beast represents the inscrutable, indefatigable darkness inside the human heart. Tolstoy, Hemingway and McCarthy are nothing but wordy hacks compared to the scribes behind "Goat Simulator."

It's hard to imagine a more richly conceived or faithfully represented world than the one in "Goat Simulator." This Swedish town plays host to a major road, a construction site, a suburban neighborhood and a water slide. Its denizens are apparently made of putty and, once knocked over, can never again stand. To this reviewer's understanding, this presents an accurate portrayal of Scandinavia.

From the goat's ever-lolling tongue, to the completely unclimbable ladders (not to be confused with the identical climbable ladders), to the one car or one truck that every citizen of Sweden must choose, "Goat Simulator" gives titles like "The Wolf Among Us" and "Titanfall" a run for their money — and then surpasses them completely.

The music in "Goat Simulator" consists of a number of forgettable, atonal bleeps and bloops that change slightly depending on your area. Upon hearing these compositions, Mozart would throw aside his pen, knowing that he would never be able to match such aural splendor. The work of Handel might as well be a commercial jingle. Gershwin's loftiest works sound like the latest single puked out by Justin Bieber.

The voice acting is also sufficient to shame the greatest works of BioWare or Pixar. Head-butting a woman who screams expletives at you, or listening to a crowd cheer before you launch fireworks at their friendly barbecue, helps make a player feel at home in the goat's awe-inspiring world.

An average person could look at "Goat Simulator" and see only what's there on the surface.

"The game is buggy and broken," this plebian would cry, sucking down his Mountain Dew, crunching his Doritos. "The gameplay is repetitive and pointless, the production values stink and the entire product was made as a self-proclaimed joke about how easy it is to host slipshod games on Steam."

"Even the development team has admitted as much," this art criminal would then point out. "On the 'Goat Simulator' Steam page, the developers recommend that you 'spend your money on something else, such as a hula hoop, a pile of bricks, or maybe pool your money together with your friends and buy a real goat.'"

This hypothetical and hopefully nonexistent person, would, of course, be missing one of humanity's crowning cultural achievements.